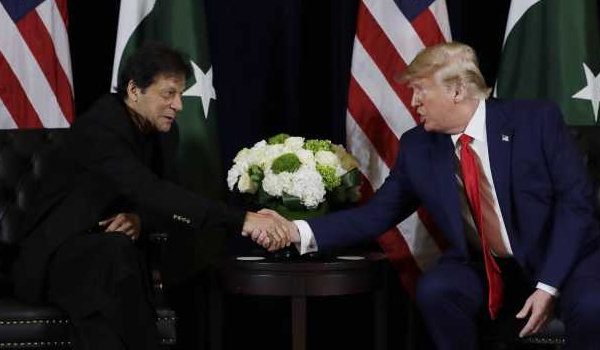 During the phone call, Prime Minister Imran termed the release of two Western hostages by the Taliban in Afghanistan as a “positive development”, saying Pakistan was happy that the duo was safe and free.

Prime Minister Imran reaffirmed Pakistan’s commitment to the advancement of the Afghan peace and reconciliation process aimed at achieving a stable Afghanistan. Both leaders agreed to continue to work together for the promotion of this shared objective, according to the press release.

The Taliban insurgents had released two hostages — Kevin King from the United States and Timothy Weeks from Australia — on Tuesday in a prisoner exchange deal with the Afghan government.

Pakistan has been trying to internationalise the Kashmir issue but India has asserted that the abrogation of Article 370 was its “internal matter”.

The premier appreciated President Trump’s continued engagement as well as his offer to mediate the Kashmir dispute.

Trump has repeatedly offered to mediate between India and Pakistan resolve the Kashmir issue.

Recalling their meetings in Washington and New York earlier this year, Trump and Imran agreed to “deepen bilateral collaboration, including in relevant multilateral fora”.