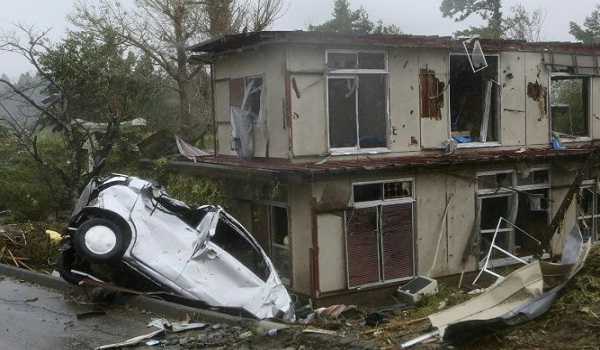 Tokyo, Oct 13 (UNI) Typhoon Hagibis in Japan has taken 14 lives, while at least 27 people remain missing, Kyodo news agency reported on Sunday. The TBS broadcaster reported that the disaster had left about 150 people injured. With many rivers overflowing into residential areas across a wide area of the country, rescue operations were under way in central, eastern and northeastern regions that were hit by floods and landslides.

As of 0800 hrs (local time) on Sunday, more than 250,000 households in the Tokyo metropolitan area and nearby regions were without electricity. Among them, some 109,100 households were out of power in Chiba Prefecture, which was hit hard by Typhoon Faxai in early September. Strong winds associated with the typhoon may sever power lines, and trees and signboards may come into contact with those hanging cables, Tokyo Electric Power Company said. The company called on people not to approach or touch such cables because they may be electrocuted.

Tokyo’s Haneda airport and most Shinkansen bullet train services resumed operations from Sunday morning following large-scale suspensions Saturday. Many flights to and from Haneda airport for Sunday have already been canceled, while operations of Tokyo’s subways were initially suspended in the early morning hours for safety checks.

Over six million people across Japan’s main island of Honshu have been advised to evacuate. By early Sunday, the authorities have lifted evacuation advisories in Tokyo and most of central and eastern Japan. The Japan Meteorological Agency had previously issued the highest heavy rain emergency warning on its one-to-five scale for Tokyo and the prefectures of Gunma, Saitama, Kanagawa, Yamanashi, Nagano, Shizuoka, Niigata and Fukushima. As of Sunday morning, all such warnings have been lifted. The agency continued to call on people to remain on alert for flooding and landslides.

According to the agency, as of 0700 hrs local time Sunday, Typhoon Hagibis was traveling 130 km off Miyako, Iwate Prefecture. It had an atmospheric pressure of 975 hectopascals at its center and was packing winds of up to 162 km per hour. After passing through the Tokyo metropolitan area and part of northeastern Japan, the typhoon is now off the Pacific coast and moving away from the Japanese archipelago. It is expected to weaken to an extratropical cyclone on Sunday afternoon.