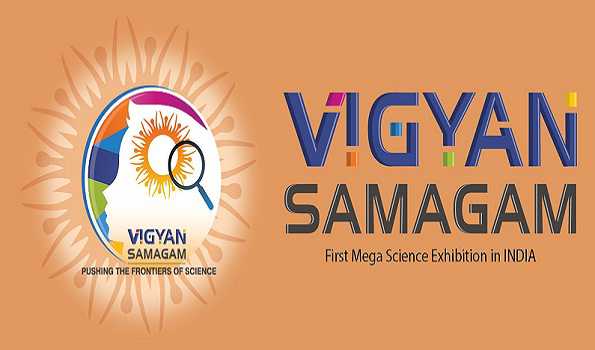 This uniquemulti-venue mega-science exhibition has been conceived and organized with an aim to providing a common interactive platform for industry, academia and institutions.

Also, the initiative takes a unique route to promote awareness on science in the public sphere, with emphasis on engaging young students and to ignite in them deep curiosity and inclination for science.

India is among a select few nations that actively collaborate on various mega-scale international projects on fundamental science and research that aims at advancing human knowledge by leaps and bounds.

To know “the origin and fundamental nature of the universe” and to answer the question like ‘What is the universe ultimately made of and how it has evolved?”,international science projects like CERN and FAIR are carrying out research in high-energy nuclear physics to reveal the contents of the heart of matter.

The aim is to search for “fundamental” particles– the building blocks of the universe – by accelerating tiniest constituents of matter in a circular path and smashing them in mega machines called particle accelerators at nearly the speed of light.

In 2012, the A Toroidal LHC ApparatuS (ATLAS) and Compact Muon Solenoid (CMS) experiments at the Large Hadron Collider (LHC) of CERN made the first-ever observation of Higgs boson, also popularly called the ‘God Particle’. Notably, bosons are particles that follow Bose–Einstein statistics and are named after Indian physicist Satyendra Nath Bose.

general relativity nearly a hundred years ago. Three key players in the development and ultimate success of LIGO, namely,Barry C. Barish and Kip S. Thorne of Caltech and Rainer Weiss of MIT were honoured with the 2017 Nobel Prize in Physics. LIGO-India is a planned advanced

gravitational wave observatory to be located in India.

The SKA project is an international effort to build the world’s largest radio telescope to peer deep into the universe, aiming to reveal mysteries of the “Big Bang” – the genesis of the universe – and its

evolution through time. For this, thousands of dishes and more than a million antennas are being set up across distances spanning thousands of kilometers.

The TMT (Thirty Meter Telescope) project is building the world’s largest ground-based optical telescope. Unlike a radio telescope, the mega optical telescope will see the universe in the “visible” light spectrum – just like a human eye – but with millions of times greater light-gathering capacity than that of a human eye.

About 100 trillion neutrinos pass through each of us every second! Yes, unbelievable but true! Neutrinos travel at the speed of light and pass through matter unhindered.

Since they hardly ever interact with matter, neutrinos are extremely difficult to detect. The INO (India-based Neutrino Observatory)is being built deep beneath a mountaintop, with an aim to detect these elusive charge-neutral particles.

The ITER is a huge international collaborative project focused on the goal of advancing the science and technology related to nuclear fusion,to make this virtually inexhaustible and clean power-generation option commercially practical. In this quest, ITER is building the world’s largest “tokamak” – a torus-shaped experimental fusion machine that magnetically confines hydrogen plasma heated to 150 million degrees for short periods at a time to cause fusion of deuterium and tritium (heavier forms of hydrogen) to form helium, with simultaneous release of energy. ITER is the bridge to future commercial nuclear fusion power plants.

India, along with other collaborating countries, makes vital contributions to all of these international mega-science projects through funding and ‘in kind’ contributions by developing, manufacturing, testing and supplying state-of-the-art equipment, software and support.

Vigyan Samagam brings under spotlight these prestigious global research projects and India’s vital contribution to them. On display at all the venues will be exhibits from CERN as well as the other sixmega-science projects. The CERN exhibit is the star attraction and a special treat for visitors. There is also a separate gallery/stall depicting India’s contribution to CERN.

Vigyan Samagam aims to ignite deep curiosity and enthusiasm towards science in young students. Also, the mega-scienceexhibition positions fundamental science and research as an aspirational career options for the youngsters.

Launched in Mumbai as the first venue on May 8, 2019,Vigyan Samagam will be organised in four cities in India over the course of almost 11 months –Mumbai (Nehru Science Centre), Bengaluru (Visvesvaraya Industrial & Technological Museum), Kolkata (Science City, East Topsia) and Delhi (The National Science Cenre).

The exhibition will be hosted for a period of 8 weeks at each of these four venues.

There would be a period of 2 to 4 weeks during which the exhibition would be relocated to the next city. The multi-venue exhibition is being organised from May 2019 to March 2020.

Scientists and researchers from the seven international mega-science projects, and Indian scientist and experts, participated in this scientific session.

Also present at the event were the invited guests from academia, industry and media. Further, Indian industry partners also showcased their achievements in an Industrial Expo running concurrently to

After these preliminaries, the mega-science exhibition was thrown open togeneral public – visitors from all walks of life – for about 8 weeks. At the venue, there are a host of exciting popular science programmes organised to enthuse the young minds, especially in the age group 10 to 18.

The flurry of activity includes action-based activities such as “Build a Telescope”, science/model-making competition, and much more.

Truly, Vigyan Samagam is a mega opportunities for everyone to get an amazing peek into the world of cutting-edge mega science!