Walk for great cause: Pink Ribbon Walk held in Hyderabad 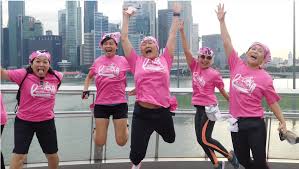 A large number of people from all walks of life, Breast cancer ‘conquerors’ & their families in addition to a huge contingent of students from various schools and colleges in the city, army personnel, diplomats and whos who of the city participated, expressing solidarity with the Pink Ribbon Campaign.

Speaking on the occasion,  Joshi complimented Padma Shri Dr Raghu Ram, Founder, CEO Ushalakshmi Breast Cancer Foundation and the innovative initiatives championed by it that has helped transform breast cancer from a ‘taboo’ issue to a much commonly discussed one thus translating to ensuring early detection and saving many lives in the Telugu States. He urged women over 40 to get themselves an annual Screening Mammogram.

During this festive season, the Chief Secretary encouraged the men in the audience to gift a screening mammogram to their spouse/mother/grandmother and added that this gift could potentially save some lives through early detection.

Dr Raghu Ram expressed his gratitude to his Team for standing “shoulder to shoulder’ with him, and equally, expressed his happiness that Ushalakshmi Breast Cancer Foundation & KIMS- Ushalakshmi Centre for Breast Diseases has completed 12 positively eventful years serving the community.

The Foundation CEO added “to win the War on Breast cancer, women of all ages must report to their doctor if there are any new changes noticed in the breast. All women must get an annual screening mammogram from the age of 40 and emphasised the importance of early detection in saving lives.