Was it an error or endorsement for an agenda to glorify the  killer of the Mahatma! 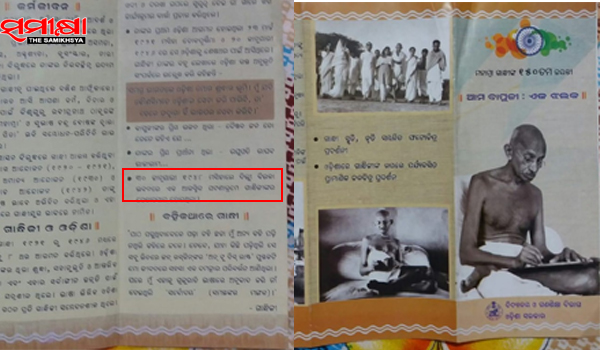 Is it part of an unspoken alliance that the Odisha government tries to maintain that the Father of the Nation was not killed by the bullets sprayed on him by Nathuram Godse but by ‘Accidental Sequence of Events’ as has been printed in a booklet in Odisha and  distributed in many schools and elsewhere.

Or was it an endorsement of the agenda by a certain dispensation to keep the killer of Gandhi away from the stains of blood.

What is worse than this unforgivable distortion of history, is the shameful interpretation by the state’s school and mass education minister Samir Dash, as he has been quoted by a Delhi based reputed website that, it (accidental sequence of events) was just to avoid creating any bitterness in the minds of children.

Can there be anything more shocking an excuse that not only expose his ignorance about history or he is simply trying to fool the people.

No time should be wasted and all those booklets in distribution must be withdrawn on a war footing and the person responsible must be taken to task.

Reading into what the minister was stated to have said, either he is trying to paper over a truth or is simply pandering to the whims of a political dispensation which, still, is not ready to openly say that, Godse acted like a terror element and shot Bapu point blank to death.

It is high time the chief minister knew about the Himalayan blunder and chastise the minister for his ignorance and order an inquiry into the issue.