What Gandhi means to me 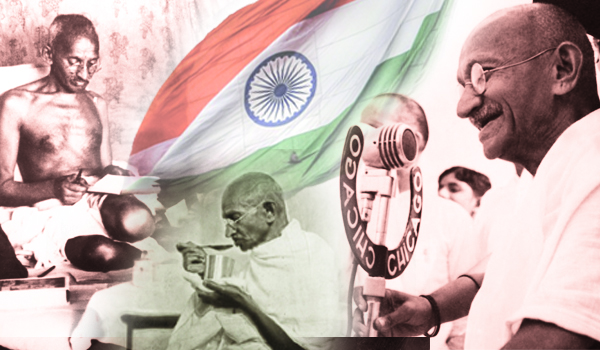 He stopped at the thresholds of the huts of the thousands of dispossessed, dressed like one of their own. He spoke to them in their own language. Here was living truth at last, and not only from quotations from books…

In 1970, I wrote a short, straightforward poem titled ‘Gandhi’ which appeared in my first book of English poems, Close the Sky Ten by Ten. Poetry, then, was a totally unknown road for me; I had neither read any poetry before nor had I any interest in it, confined as I was to the few stray poems I had been forced to study for my school and college courses. The closing lines of the poem ‘Gandhi’ went like this:

We have burst open his blood to bleed

We are on his side perhaps

We do not know it

With no knowledge of poetry behind me, I penned these lines. The poem was a room. At times I entered it. Or I could not. I didn’t know what I was looking for:

The small man was standing in the shadows. The next moment he was lying on the moist ground. There were people everywhere, but it was the village of the dead. The fiery tongue of time licked the lost map of India.

Today at 88, I reread this old poem. And I discover it is not a poem in the true sense at all. Poetry is never writing or books. It is “voice,” vak, a still hand that stretches out, all alone. I know this much. Nothing more.

When I said “We hate him” I did not know what I exactly meant. Did I really mean what was written in those lines? Was it a kind of righteous rage that pushed me into writing those words about hating him? Or was it because I was reprimanding myself that there was no fairness in the world?

I was 19 when I first heard his words, uttered gently and full of tenderness. The same sorrowful twilight of our country was around him, the same kind of half-light that killed him four months later. I was in my final year of Physics at Science College, Patna. The Bankipur Maidan was flowing with motley crowds who had come to his prayer meeting. The sun had almost set. I had walked all the way from my student lodgings at Mahendru Ghat four miles away. The air was cool with the advent of winter.

Soon, his hands resting on the shoulders of his two nieces, the old man walked towards the makeshift dais. My thin body made it possible for me to inch my way ahead, squeezing past people, until I was way up front, close to him.

Gandhi, the Mahatma, in the flesh.  A man whom I held dear; dearer than my parents perhaps. And there he was, right in front of me at last. I recalled the first time he had come to Odisha: March 23, 1921. I hadn’t been born then.

But this was the memorable year 1947, so historic for us. I considered myself fortunate at being alive that moment, when India was wound with ribbons of orange, white and green. Pride was written boldly on my face, a delicious, wonderful pride to be a citizen of the new India.

Gandhi walked past me, his body slightly bent, his footsteps slow and sleepless. I was so close to him that evening I could have stretched out my hand and touched him.

He had just arrived in Patna after a march to promote peace and understanding across the interiors of Bihar. Before this, he had had a hectic journey in the riot-affected areas of East Bengal. All this must have had a heavy toll on his body and mind. His veiny face showed clearly how tired he was. The wounds failed to hide themselves as he began speaking to us.

His journey would never end, I felt. I was young, and was unable to understand the meaning of forgiveness as he did. Each step he took made his mission more secure, stronger.

Like the Ganga, on the banks of which my days passed, and which filled my mind, Gandhi was my mind. He became it. I looked up. The sky was clear, cloudless. I saw the first glimmer of the evening star.

And the leap of compassion in his look.

Something resembling sadness seemed to come into his eyes and drift in the air. I heard silence, and I turned into dream: I felt myself being carried along unknown paths until this land of a gentle old man became a legend, and later would become a myth to generations to come.

This was one of the few prayer meetings I could attend in Patna. My examinations were near, and I had neglected my studies. I had always been restless, always urged on by my heart. I never imagined then that I would go on to write one day, either prose or poetry. And I invariably felt the tug of forces strange to me.

About three months later, on the evening of January 30, Gandhi was shot dead at just such a prayer meeting in Delhi.

I was strolling near the Patna University Senate House, doing nothing, looking at the books spread out on the pavement, when a commotion close by attracted me. As I approached, I could catch stray sentences from the incoherent babble of voices. “Gandhi had been shot dead…” “Was the assassin a Muslim?”

Time, or whatever it was, that carried me along, somewhere, or perhaps nowhere, did something spectacular to me. It suddenly seemed to turn in the reverse direction, anticlockwise. The disbelief that gripped me was enormous.

It was as though thunder had been strangled in the sky above.

Returning to my lodgings, I found our student mess closed. Every shop was shut for the night. The streets wore a deserted look. Here and there were groups of people, talking in hushed tones. I walked up to my little room, lit the kerosene lamp, and tried not to think of anything.

The last meal I had eaten was at 10 that morning, just before I left for classes. It was seven in the evening when I entered my room. I realised I had to wait for at least another 12 hours before the Law College Cafeteria opened for breakfast. I was beginning to feel quite hungry.

The night passed. It was too much to grasp what was happening. I found I was drained of intense feeling.

Growing up with Gandhi has not been easy for a person like me. The study of physics never stood in the way of emulating his living. Although I did not quite comprehend the deeper implications of the Charkha and Sarvodaya, my heart always softens when I think of him and his beliefs.

Years after independence, one questions the society we live in. Where is the equitable distribution of wealth Gandhi dreamt of? What progress can we be proud of when most of our tribal population is in rebellion against the government and farmers commit suicide because of debts they are unable to repay? And when will we learn to rule ourselves?

In moments when I am alone, and poetry pushes me against my will into a wide, wide expanse of loneliness, I think of him and his courage — the mature convictions of a frail old man who could once walk into Number Ten of a famous London street wearing merely a short dhoti. I might not agree with all that he said, but he could make me break out of the loneliness of my solitary being to grow into something greater.

I don’t wish to praise him. His selflessness is unmatched. He has been there all these years, behind all my poems. When a depressing moment led me into a poem titled ‘The Fifteenth of August’, I spoke to Gandhi.

There is so much land between us now.

Gandhi risked those things few men can risk, and reached a place we can never reach. And so he lives on, untouched as  history.

(the article is taken from Jayanta Mahapatra Reader, published by Sahitya Akademi and edited by Durga Prasad Panda)