What’s left for Baijayant Panda & Damodar Rout! in quest of a re-entry into BJD 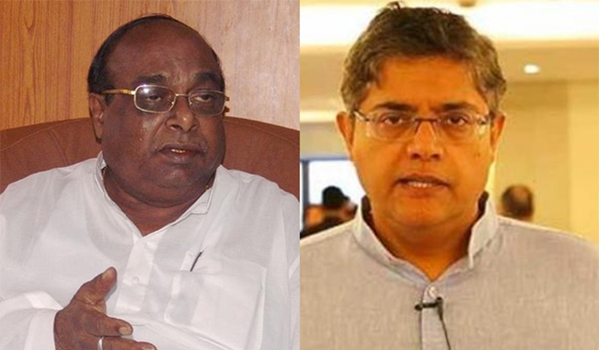 Had politics been a game of trapeze then some in the comity of leaders in Odisha could have really produced the puzzle that they themselves would have not been able to solve ! Slowly, the politics in Odisha, as elsewhere, can spring surprises. But there are some in politics who, inadvertently or otherwise, try to seek refuge in self-styled or even notional arrogance that they can change the course of politics by their colossal misconceptions. Ultimately they land up in an ‘Alice In The Wonderland ‘ state that leads them to an absolute illusion about themselves.

Once the two most debated and discussed political faces in Odisha, Baijayant Panda and Damodar Rout, are cases hardly any keen observer of politics can afford to ignore. And if the rumours do play as any basis for some credence, chatters in the BJD political grapevine hint that the duo, driven to a kind of political exasperation after the defeats in the last general elections, are somehow keen to seek an asylum in the BJD only.

Baijayant Panda who had betted ‘dollar to doughnut’  to become a game-changer in Odisha by his sabre rattling at Naveen Patnaik ,has not only failed in that pursuit but he has even failed to discover his proper place in the Bharatiya Janata Party which he had chosen to be a safe sanctuary and had indulged in a kind of self-back patting to rejuvenate his political relevance in the state. That also fell flat on the face.

What has made things more uphill for the BJD deserters like Panda and Rout, is the abrupt change in the political chemistry between BJD and the BJP. Where the selective bonhomie that was notionally keeping  Naveen Patnaik and Narendra Modi together, transformed into an unwritten agreement between NDA and the BJD.

Nothing could have come worse for Panda or others like him at a time when they were, perhaps, vainly trying to claim themselves as leaders of consequence in the BJP.

But their ambitions could not travel long.  Even after his nasty defeat in the last assembly polls in Erasama, Damodar Rout was hardly seen to have any remorse. If at all, Rout had a shoulder to cry on and that was his son, Sambit Routray, who won from Paradeep as a BJD MLA.

An accomplished survivor in politics Rout knew that he was torn between love and politics but, he seems happy with the former thus keeping his options open, in case. As seen the past that the BJD has turned to become an one-way traffic, it is unlikely that the BJD leadership would ever repose its faith on those who dared to stare on its face.