Why shave the head ? South Korean politicians shaving their heads 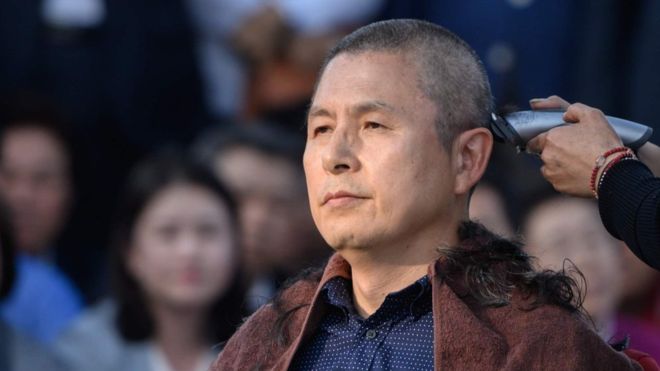 South Korea’s opposition leader has become the latest politician to publicly shave his head in a protest against the government. Hwang Kyo-ahn had his hair entirely shaved off in front of supporters and journalists outside the presidential palace on Monday evening. The protest is over a new justice minister, Cho Kuk, whose family is embroiled in corruption allegations. Last week, two female MPs shaved their heads over the same controversy, said a BBC News report.

All three are from the conservative end of the political spectrum and oppose the current government under President Moon Jae-in.They want  Cho to resign or be sacked. What are the protests about? Cho Kuk, a former law professor and aide to  Moon, took office last week as justice minister.But his critics are angry that he was nominated for the post by  Moon despite ongoing accusations of academic fraud and financial crimes against his family. His wife, also a professor, has been indicted for allegedly forging material which helped their daughter get into university and secure scholarships, something which has angered other university students.

Prosecutors are also looking into investments into an allegedly dubious equity fund linked to another relative. In recent weeks, prosecutors carried out several raids linked to   Cho’s family. In his confirmation hearing last Friday,  Cho expressed his “deepest apologies to the younger generation” over the alleged perks his daughter received. But said he said he wanted to get on with reforms to the justice system.

Moon has stressed there has been no confirmation of illegal action and said it would be bad precedent not to appoint someone solely on the basis of allegations.
But the case has caused a public debate about class privilege in South Korea, which has been rocked by corruption scandals over recent years. The previous government was toppled over corruption allegations and former President Park Geun-hye is currently serving prison time for bribery and abuse of power.

Hwang served as prime minister under former President Pak – some observers have suggested his public stunt was in part motivated to undermine current President Moon Jae-in.

Why shave the head?

South Korea has a long tradition of hair shaving as a form of protest. The act is rooted in traditional Confucian teaching, and has historically been seen as a way of demonstrating commitment to a cause. During the 1960s and 70s, when South Korea was under military dictatorship, dissidents would often shave their heads as a sign of resistance. Over the past decades, activists and politicians have used it as way to protest. In 2018, women shaved their head at a march against the rise of spy cameras being placed in toilets and changing rooms to secretly film women.

Two years before, more than 900 South Koreans shaved their heads in a show of protests at a US anti-missile system. In 2007, hundreds of residents of Icheon City shaved their heads over a controversy where to build a new industrial plant. Hwang’s public stand took place outside the presidential palace, the Blue House, on Monday evening. Referring to   Cho as “criminal” he urged him to stand down. He told the crowd watching: “I’m here to pledge my determination by shaving my head. I will not step back.”

His protest drew wide attention on social media. He made it into the top 10 trending list on Naver, South Korea’s number one search engine. Many comments likened his looks to actor Gary Oldman – earning him the nickname Kimchi Oldman. (UNI)