After 5-day lull, political action to return to Maharashtra 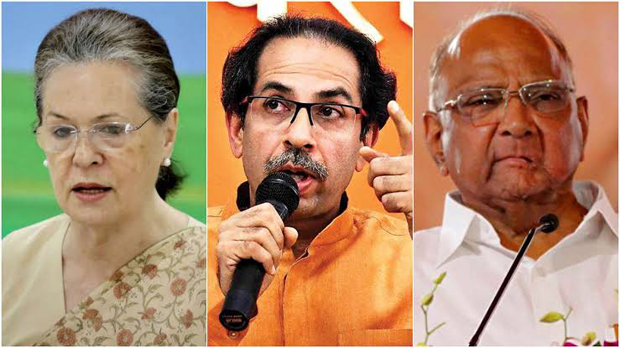 Mumbai, Nov 21 After a hectic five days of politicking in New Delhi, the political action returns to Maharashtra again on Friday as the Shiv Sena, Nationalist Congress Party and Congress finalise their government formation plans, according to sources in these parties.

Most Congress and NCP leaders will return to Mumbai late Thursday or early Friday with a series of crucial meetings lined up before the finishing touches are given to the prospective ‘MahaVikasAghadi’ three-party government in the state.

For starters, around noon on Friday, Shiv Sena President Uddhav Thackeray has summoned a meeting of all the 56 party legislators at his residence ‘Matoshri’ in Bandra.

All have been asked to come fully prepared with their identity cards, the election certificates issued by their respective poll returning officers and other relevant documents which may be required in the coming few days.

Thackeray is likely to brief them on the finer details of the proposed tri-party alliance that is shaking tape with a series of minutely-detailed, multi-party parleys since the past two weeks in Mumbai and New Delhi, a party source said.

A Sena leader revealed that Friday’s meeting will be crucial on who will be the CM with party leaders and cadres unanimous that Uddhav Thackeray himself should wear the crown and create political history.

Around 1.30 pm, the Congress Legislature Party meeting will be held to formally elect its leader where the legislators would be informed in detail of the government formation strategy and other aspects of the power-sharing formula.

Subsequently, a meeting will be held with the Congress-NCP led ‘MahaAghadi’ comprising various smaller allies in Maharashtra where their views and support will be sought for the proposed ‘MahaVikasAghadi’ which would include a new entrant, Shiv Sena.

Thereafter, the top leaders of the three parties shall go into a huddle for the penultimate tete-a-tete and chalk out plans on when to stake the government formation claim before Governor B.S. Koshyari.

According to official sources, the Governor is likely to be away in New Delhi on Saturday-Sunday for a national conference.

“In case the Governor is not available, we may go to stake claim before him early next week,” a Congress leader told IANS.

Though no party leaders are willing to disclose the exact details, they assured that “all the modalities have been worked out to the complete satisfaction of the three partners” to ensure a smooth and stable government for the next five years in the state.