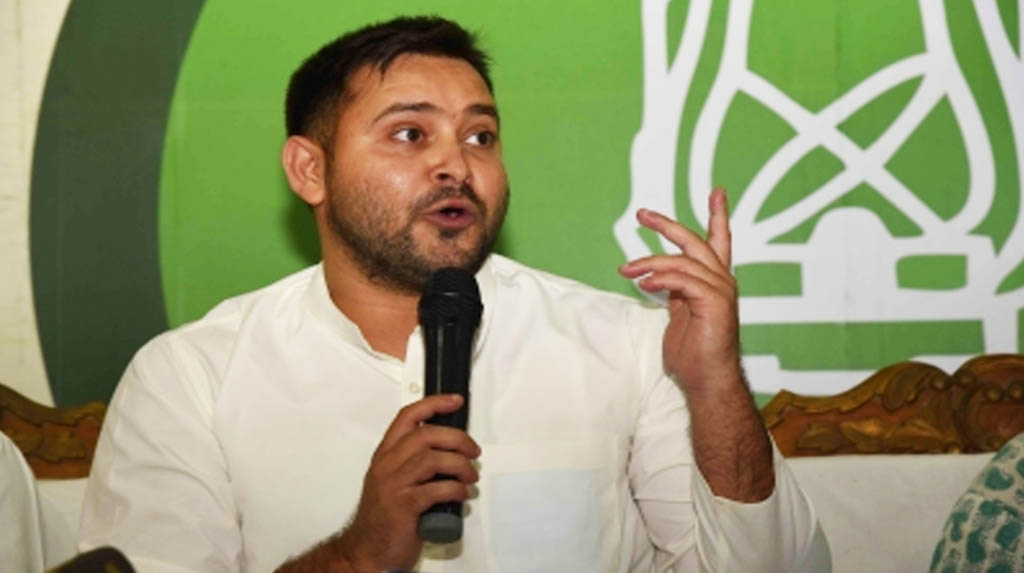 Patna:  RJD leader Tejashwi Yadav on Friday alleged in the Bihar Assembly that Chief Minister Nitish Kumar did not sire another child as he was afraid of becoming father to a female child, drawing condemnation from the ruling NDA leaders. Nitish’s party JD-U called Tejashwi as someone who had “failed in Class 9”.

Even though Nitish did not verbally react to the remark of the Leader of Opposition on the last day of the Assembly session but only smiled, Deputy CM Tarkishore Prasad dubbed it as an “unfortunate personal attack”.

As the Speaker ordered the removal of the remark from Vidha Sabha records, Tejashwi’s remark triggered a war of words between JD-U and RJD, with a JD-U leader calling Tejashwi as a “flop cricketer and Class 9 failed student”.

During campaigning in the run-up to the Assembly polls in October-November, Nitish had taken a dig at his friend turned bete noire Lalu Prasad, claiming without taking names that people sire 8-9 children due to their desire for a male child.

The Rashtriya Janata Dal had taken it as a personal attack on Lalu Prasad and his wife Rabri Devi.

Tarkishore Prasad said: “The Speaker gave time to Tejashwi to speak in the House and everyone expected he will talk on the RJD’s vision; instead, he indulged in personal attack on Nitish Kumar. It is unfortunate.”

Neeraj Kumar, a former Minister and Janata Dal-United chief spokesperson was the most vocal in flaying Tejashwi.

“We can’t expect much from a person who failed in Class 9. He is a flop cricketer and an illiterate legislator. He has personally attacked Nitish Kumar whose work has been appreciated by people like Bill Gates and Amartya Sen,” Kumar said.

“On the other hand, Tejashwi’s father Lalu Prasad has been convicted in fodder scams and his temporary address is 3351 (Lalu’s prisoner number 3351), Hotwar Jail, Ranchi. He is also facing many criminal charges,” the JD-U leader alleged.

RJD MLC Subodh Rai maintained that it was Chief Minister who initiated the personal attack on Lalu Prasad and Rabri Devi. Even Neeraj Kumar has used so many unparliamentary words for Lalu Prasad and his family, he alleged.

“Nitish Kumar always claims that Assembly elections in 2015 and 2020 were won due to his face value. Now, he has no face value. His party has won just 43 seats. We don’t recognise him as the CM anymore. He is just a nominated CM of the BJP,” Rai remarked.