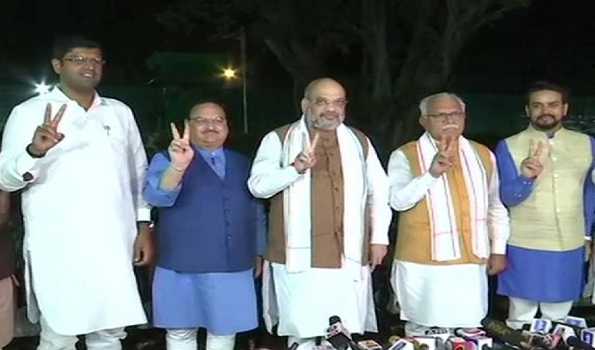 Addressing reporters at his residence, BJP president Amit Shah, who was flanked by JJP chief Dushyant Chautala and incumbent Haryana Chief Minister Manohar Lal Kattar, said a meeting was held by leaders of both the parties and keeping in view the spirit of people’s mandate both the parties have decided to form the government in Haryana.

Several Independents have given their consent to support, Mr Shah stated. Mr Shah said senior leaders of both the parties will meet Governor Satyadev Narayan Arya on Saturday  and stake their claim to form the government in the state.  ”Under the leadership of Prime Minister Narendra Modi, we will work for the progress of Haryana for next five years,” he said.

He said while the chief minister will be from the BJP, the deputy chief minister will be from the regional party. Prime Minister Narendra Modi and BJP chief Shah have lauded Mr Khattar making it clear that the saffron party would continue with him only. Mr Khattar is likely to be elected leader of BJP legislature party in Chandigarh on Saturday and Nirmala Sitharaman and Arun Singh will be central observers at the meet.