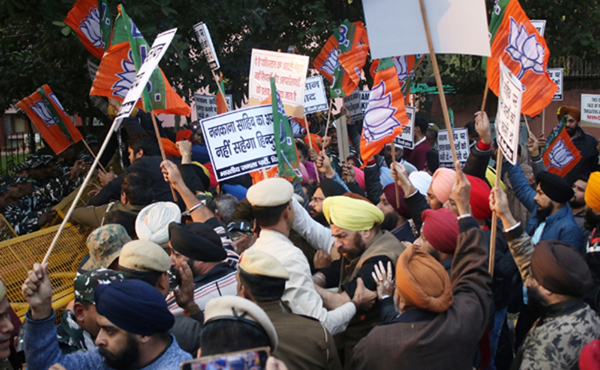 New Delhi, Jan 4: The Bharatiya Janata Party (BJP) seems to have decided to turn the attack on the Nankana Sahib, some 75 km west of Lahore in Pakistan, into a Delhi Assembly poll issue and use it as a shield to defend the new citizenship law (CAA).

Addressing a press conference here on Saturday, BJP National Secretary R.P. Singh said, “On Friday, stones were thrown at the Nankana Sahib Gurdwara and slogan to throw Sikhs out of Pakistan and send them to India were raised. The Pakistan government didn’t take any action for 13 hours.”

And then Singh, himself a Sikh, gave it the political twist, “Those who are opposing the Citizenship (Amendment) Act may now understand how Sikhs are living there.”

He was addressing the media along with another National Secretary Tarun Chugh and party MP Meenakshi Lekhi.

Sikhs constitute around 4.5 per cent of Delhi’s population, as per the 2011 census. The Nankana Sahib is among the most revered places for Sikhs as Guru Nanak, the first Sikh guru, was born there in 1469.

During the day, the Shiromani Akali Dal (SAD) and the Congress held protests outside the Pakistan High Commission, here.

Speaking to IANS, Lekhi called the Congress protest an example of “double standard” and an attempt to make gains in Delhi polls. “On the one hand they (Congress) are objecting to the CAA, on the other they are doing theatrics over attack on Sikhs,” Lekhi said.

The CAA benefits Sikh, Hindu, Jain, Buddhist, Christian and Parsi refugees from Afghanistan, Pakistan and Bangladesh who sought refuge in India before 2015.

The Congress and other non-NDA parties are opposing the CAA calling it “discriminatory” and “against the idea of India” as it leaves out Muslims from those countries from availing the facility.

But with Delhi election round the corner, by linking the attack on the Nankana Sahib with the CAA, the BJP has set the electoral discourse in motion.

Taking on former Punjab Minister Navjot Singh Sidhu, a Congress leader who had visited Pakistan for Imran Khan’s oath-taking ceremony in August 2018, Lekhi said, “I don’t know where and how Siddhu has gone missing after the attack.”

He had even hugged Pakistan Army Chief General Qamar Javed Bajwa, triggering a controversy back home.

Lekhi’s mention of Sidhu after the Nankana Saheb attack is an obvious attempt to garner 555,602 Sikh votes in Delhi for the BJP.