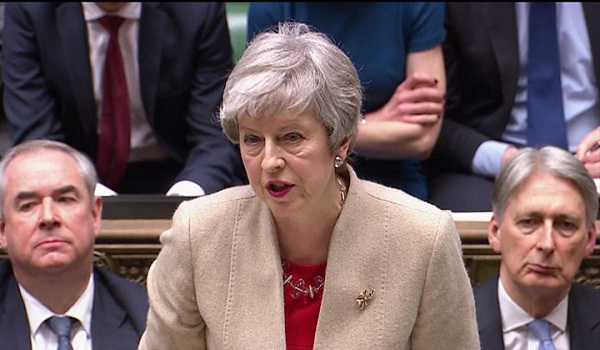 British Prime Minister Theresa May wrote to the European Union (EU) on Friday to request a further delay of the Brexit date until June 30.

The prime minister said the British government would like to agree a timetable for ratification that allows Britain to withdraw from the EU before May 23, but the government would continue to make responsible preparations for the European elections on the date.

“The government’s policy has always been and remains to leave the European Union in an orderly way, and without undue delay. The House of Commons has not thus far approved the deal that would enable this, nor – despite considerable efforts by both Members of Parliament and by the government – has it yet found a majority in favor of any other proposal,” May said.

The British government agreed that leaving the EU with a deal is the best outcome as the House of Commons continued to express its opposition to no deal Brexit, she added.

May had to set out future plans to the EU this week, under the terms given by the bloc for the first Brexit extension which is set to end on April 12. The British parliament hasn’t approved any divorce deal so far.

She also wrote in the letter that the “impasse cannot be allowed to continue,” as it was “creating uncertainty and doing damage to faith in politics” in Britain.

She said if cross-party talks with the Labour Party could not establish “a single unified approach” in the parliament, the MPs would be asked to vote on a series of options instead which the government “stands ready to abide by”.

May wrote that her request “accepts the European Council’s view that if the United Kingdom were still a member state of the European Union on 23 May 2019, it would be under a legal obligation to hold the elections.”

A senior EU official said Tusk was considering an extension offer of up to one year, with the possibility of leaving sooner.

The option could be presented to May at a EU summit on Brexit on April 10 in Brussels and if accepted, Britain would have to hold elections to the European Parliament in May, the official said.

Britain’s exit from the EU, nearly three years since the country voted in a referendum to leave the bloc, is now in doubt because the British parliament cannot decide what exit terms it wants, just a week before the current Brexit date of April 12.

May offered to quit to get her deal passed, but it was defeated for a third time last Friday – the day Britain was originally due to leave the EU. She is now in talks with the opposition Labour Party leader Jeremy Corbyn to find a way out of the deadlock, but it is not clear whether they can find a solution in the next few days. (UNI)