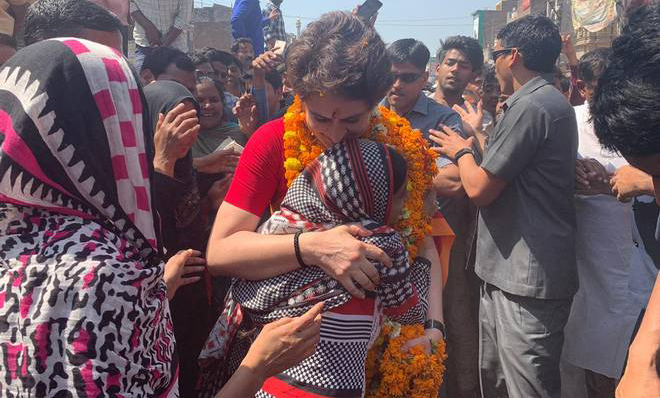 Campaigning has been intensified in the western Uttar Pradesh after stage is set for the first phase of polls on April 11 just around 10 days left for the electioneering.

Western UP will pave way for the formation of the next government at the Centre, when 16 seats will go to polls in first two phases on April 11 and 18.

Prime Minister Narendra Modi sounded the poll bugle here with his first rally in Meerut on March 28 and now he is expected to address one more rally in the region, which is likely to be in Saharanpur on April 5.
BJP president Amit Shah would be holding two rallies at Nagina and Bijnore on Sunday besides going for another couple of rallies for the first two phases.

UP Chief Minister Yogi Adityanath ,is already criss crossing the state with holding several rallies daily along with other senior leaders of the BJP.
However, the the Samajwadi Party and the Bahujan Samaj Party along with their partners Rashtriya Lok Dal will organise a joint rally in Deoband in Saharanpur on April 7 in a massive show of unity to launch their campaigning. Akhilesh Yadav’s SP and Mayawati’s BSP, along with the Rashtriya Lok Dal, are contesting the Lok Sabha polls together.
Though joint campaigning will commence from April 7, but the parties barring Mayawati or Akhilesh, smaller leaders of these parties have started campaigning in respective seats. Congress, however, is missing from the campaigning in most of the seats.

In the first phase, the eight seats will go to polls that include Ghaziabad, Gautam Buddh Nagar, Bagpat, Saharanpur, Meerut, Muzaffarnagar, Bijnor and Kairana. The BJP currently holds all the seats, barring Kairana, which it lost to the SP-BSP-RLD alliance in last year’s bypolls.

In most of the seats there is a direct fight between the alliance and the BJP, but presence of Congress in some seats would have an impact on the result.

The BJP is banking on continued loyalty of the upper-caste voters, who have traditionally supported it. The saffron party has fielded four upper-caste candidates in this phase — General VK Singh from Ghaziabad, Mahesh Sharma from Gautam Buddh Nagar, Raghav Lakhanpal from Saharanpur and Rajendra Agarwal from Meerut. All of them are sitting MPs.

The non-upper caste Hindus are the most sought-after vote bank for both the BJP and the opposition alliance. In the last general elections of 2014 and the 2017 Assembly polls, a large section of this base had shifted to the BJP. Jats and Gujjars make up most of the OBC population in these seats — on an average, it ranges over 20 per cent in each of these seats.

The Muslim vote bank, around 38 per cent in Saharanpur, stands a chance of getting divided between Congress Imran Masood and alliance candidate Hazi Fazlur Rehman, fighting on a BSP ticket. Masood was the runner-up in the 2014 Lok Sabha elections. Muslims make up 32 per cent of the vote bank in Bijnor, 31per cent in Meerut and Muzaffarnagar each, 26 per cent in Kairana, 20 per cent in Baghpat, 18.5 per cent in Ghaziabad, and roughly 14 per cent in Gautam Buddh Nagar.

The Scheduled Castes in the region comprise the Chamar or Jatav community. The Chamar vote bank ranges from 9 per cent in Kairana to nearly 17 per cent of the total 20 per cent of Dalit votes in Saharanpur.
Traditionally, this section has voted for the BSP. But the BJP made a big dent in this segment in both the previous elections in 2014 and 2017. However, there is a noticeable absence of “Modi wave” this time around.

In Bagpat and Muzaffarnagar, the Jat-OBC factor will be the most decisive one. RLD chief Ajit Singh, a Jat by caste, is the alliance candidate from Muzaffarnagar and will be up against BJP MP Sanjeev Baliyan, who is also a prominent Jat leader. Ajit Singh’s son, Jayant Singh, is the alliance candidate from Bagpat and will fight against another Jat, Union minister Satyapal Singh.
The Congress has not fielded candidates from these constituencies in a show of support. Whichever party garners the biggest chunk of the Jat vote will define the game.

In Meerut, the opposition alliance has fielded Haji Yakoob Qureshi. While the sitting BJP MP can expect 25 percent of the upper-caste vote, the winning candidate will have to get the bigger chunk of OBC and Dalit votes (and the 14 per cent-plus Chamar vote in this segment).

In Gautam Buddh Nagar and Ghaziabad, the OBC-Dalit combination will play a decisive role as well. Although the alliance hasn’t fielded well-known faces from these seats, the caste and political equation will matter the most.