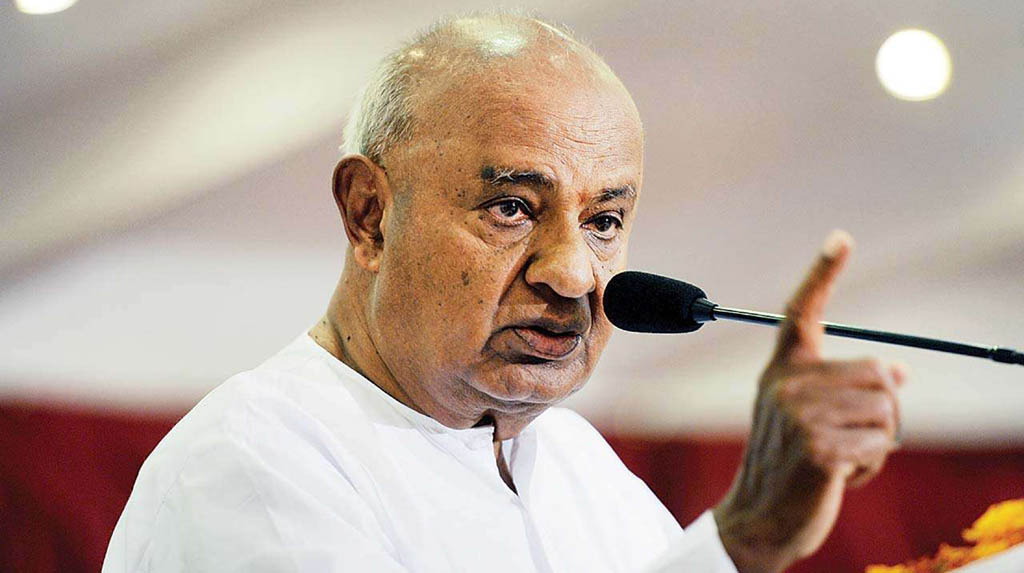 Bengaluru: The opposition Congress in Karnataka is open to supporting Janata Dal-Secular (JD-S) supremo and former Prime Minister H.D. Deve Gowda’s election to the Rajya Sabha if he chooses to contest the June 19 biennial elections to Upper House of Parliament, a party official said on Saturday.

“We are open to supporting Deve Gowda if he contests elections to the Rajya Sabha from the state, as we will have 24 surplus votes in Assembly after electing our leader Mallikarjun Kharge who is the party nominee,” Congress leader Prakash Rathod told IANS here.

“Our high command will decided if Deve Gowda agrees to contest and his party JD-S approaches us. It will be an honour for the state to have a person of his stature in the Upper House,” said Rathod.

With the term of the four Rajya Sabha members, including 2 from the Congress (B.K. Hariprasad and Rajeev Gowda) and one each from the BJP (Prabhakar Kore) and Janata Dal-Secular (Kupendra Reddy) ending on June 25, the Election Commission on June 1 notified the bypoll in the state for June 19, and the last date for filing nominations as June 9. Vote count is slated on June 19.

With 68 Congress legislators in the 223-member Assembly, Kharge’s win is assured as he needs only 44 votes, while the JD-S with 34 MLAs requires 10 more votes for its candidate’s victory.

“As the last date for filing nominations (June 9) is still 3 days away, we will wait for the JD-S to formally approach us if Gowda agrees to contest,” reiterated Rathod.

Gowda, 87, lost the May 2019 Lok Sabha elections from Tumkur to G.S. Basavaraju of the BJP, though his grandson Prajwal Gowda won from the JD-S bastion Hassan, defeating A. Manju of the BJP.

With 117 lawmakers, the ruling BJP will get two of its nominees elected but will face stiff contest if it fields a third candidate, who will require 15 more votes to win the battle of ballots.

Kharge, 77, a former Union Minister in the UPA government, also lost the May 2019 general elections from the Gulbarga (reserved) constituency to Umesh Yadav of the BJP.

“As 12 vacancies are due in the Legislative Council, including 5 by nomination and 7 through by-election after the terms of some MLCs end, both parties can help each other in getting more of their candidates elected as a quid pro quo,” Rathod hinted.

As per their present strength in the Assembly, the Congress can get two of its nominees elected to the Council unopposed and JD-S 1 and the BJP 4 as each of their candidates requires 29 votes to win.

Though the Congress and the JD-S formed a post-poll alliance after the May 2018 Assembly elections threw up a hung verdict and formed a coalition government under H.D. Kumaraswamy on May 23, 2018, revolt by 17 rebels in both the parties led to the fall of their government after 14 months on July 23, 2019.

In the May 2019 general elections, both the coalition partners formed a pre-poll alliance and fielded common candidates but retained only one Lok Sabha each, while the BJP won 25 of the 28 seats the state has in the Lower House.

Ramamurthy had defected from the Congress and got re-elected unopposed on December 5, 2019 as a BJP nominee and hence his term is till June 2022.