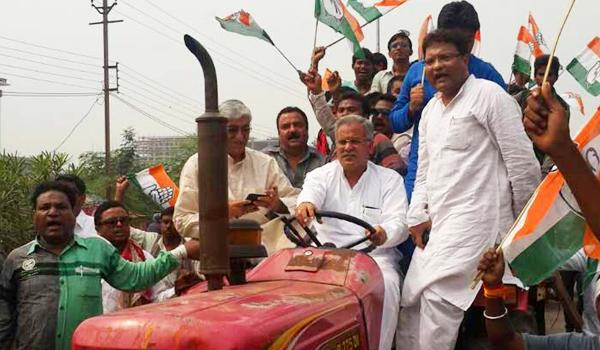 Raipur, Dec 25  The Congress has emerged on top in the Chhattisgarh urban body elections, the results of which are still coming in. The counting continued all day on Tuesday but the final picture will emerge late on Wednesday.

The Congress has, however, performed below expectations considering the changes it had brought about in the election format. For many years mayors were elected directly while the corporators will elect them now.

Unlike in the Lok Sabha elections six months ago, the voters have backed the Congress. The party has won 1,283 out of 2840 councillors’ posts in 151 bodies of the state. The BJP is far behind in terms of numbers. It had dominated the civic bodies in the past 15 years.

This time around BJP has won in 1,131 wards. Former Chief Minister Ajit Jogi’s outfit Jan Congress of Chhattisgarh has ended up on the margins with 36 councillors, while Independents with 364 councillors hold the key in many councils and corporations.

Of the ten municipal corporations in the state, the Congress may have its mayor in seven. Independent councillors will play a decisive role in Rajnandgaon, Dhamtari and Korba.

The BJP has suffered a major setback in the first urban body elections since it lost the assembly elections last December.

The BJP is unlikely to win a Mayor’s post in any of the corporations. Senior BJP leaders who contested the Raipur and Bilaspur Municipal Corporations and noted BJP leaders have had to face defeat. Even where the Congress does not have a majority, the BJP cannot nominate its bayor just because it lacks requisite councillors.

In Patan, the area of Chief Minister Bhupesh Baghel, the Congress has almost swept the opposition aside by winning 12 out of 15 seats. The party has also won in Kawardha, the home district of former Chief Minister Raman Singh.

State BJP President Vikram Usendi, on the other hand, believes the BJP has done better than it did during the assembly election a year ago.

The Congress’ failure to increase its appeal since the assembly elections shows there is some disappointment over its performance. The Bastar result should disappoint the Congress.