Cutting school-bag weights so late, and what about a sleepless posterity that suffers from insomnia 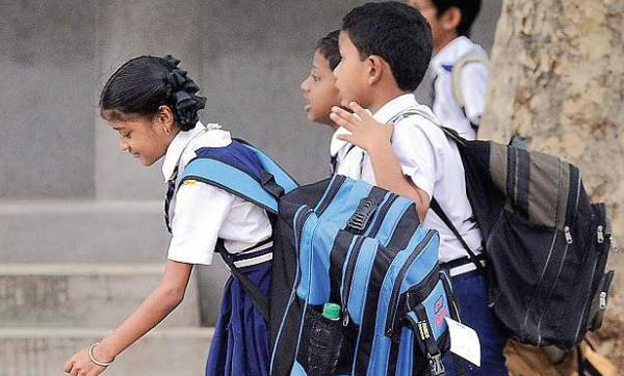 The issue about loading the school kids with heavy school bags and other stressful things had already raised the heckles among sensitive thinkers world over.

But, interestingly the Indian system has an unenviable aptness at getting injected with wisdom late in the day. Why ? the answer is simple. We always chose reactive recourse and that is at the cost of a child’s delicate health and wellness which gets severely inflicted by the callous ease shown at kids all over.

Was the government, whether in a state or at the Centre, had its blinkers on to the stupid reality that by forcing the school kids  to carry heavy bags on their shoulders, in some cases the school bag weighing almost half of the weight of the child itself.

Can there be anything more obnoxious an ignorance than this that the system, now showing wisdom in hind sight, to enforce a guideline to cut down the weights of school bags a kid is subjected to carry as shoulder load and some walking long distances to the schools.

Are they beasts of burden!

One does not know if the Human Resource Development(HRD) ministry which came on last Monday waking up from its slumber of eminence to effect its cap on regulating school bag weights crushing the children all those years. They can at best plead ignorance citing  lack on implementation of the caps by school authorities just to shirk from their responsibility .

Which is the normal practice with most of the ministries to pour down the blame at the threshold of school authorities, who even are no holy cows in this regard.

Students of standard I & II to carry a bag not weighing more than 1.5 kg, or from class III to V weigh 2 to 3 kg and so on. Do the school principals or headmasters make a reality check ever, let alone the people from the ministries. There are schools where kids can be seen carrying a load up to 5 to 8kg ! Where is the HRD ministry or do they even meander through the gullies of pain where a frail child not weighing more than 17 to 20 kg is crushed by a school bag as heavy as 8 kg..

Doctors keep warning about the hazards. Hunchback, backache and extreme fatigue are serious problems almost 68% kids are prone to. And that too in the tender age group pf 7 to 13 yrs only. ‘ Even there are risks of a child developing problems like spondylitis and other backbone impairments ‘ said Dr.R N Mohanty, noted orthopaedic surgeon. ‘By such frequent inflictions a child may risk mental irritations as well’ he added. Some parents resort to weekend sleeps as compensatory but they hardly realise that, according to doctors, that make circadian rhythm changes ‘more drastic’ .

But the irony is, and all pervasively so, that the guiding philosophy in schools focus more on somehow finishing the syllabus, unmindful of the reality that, a child does not get his or her learning abilities enhanced by such practice. Who cares, the teachers are a relaxed lot once syllabus is over and the principals wax eloquent by such make-believe accomplishments.

An usual thing that come to the notice of all parents is the day long fatigue manifested in the body language of a child once back home from the school. Which, otherwise, was an usual thing to see, say in the days when schools used to start at 9.30 or 10 am.

A lot of thoughts are being given to the compelling reasons behind such early hours school timings. Nathanie F Watson, Professor of beurology at the University of Washington School of Medicine and co-director of the University of Sleep Centre believes that ‘ the standard  early time for schools may set adolescents up for sleep problems like insomnia.

Any child in the tender age badly requires 8 to 10 hours sleep a day which never happens when happens when schools refuse classes to start after 8.30 as recommended.

Looking at the circadian rhythm, well it is hardly possible to sleep before 11 Pm and if the school bell rings at 7 to 8am, Watson points, ‘ the mathy does not add up and they are not going to get the sleep they need’.

Even there is a wide endorsement among many experts that, the bell timings at school should be at 8 am or even bit later for the start of the classes. That is how now it is being mulled seriously in schools in many developed countries. Better to do that, than reducing the years of adolescence of a child towards a sound adulthood not a sleepless posterity.

Last but not the least, in total disregard to the directives of the apex court that Adhaar card cannot be a compelling reason to bar the admission of a child into a school, some schools, including schools run by the Centre, are demanding Adhaar cards making it ‘ mandatory’ for admission. Adhaar can be useful or not is different but, it is a situation that postulates legal action against such schools.