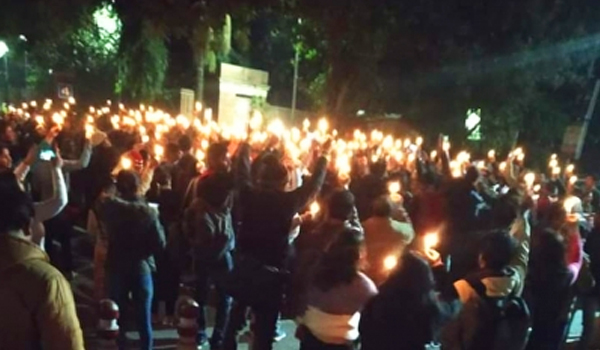 For these 35 days of protest the teachers have been braving chilly winds and harsh winter of Delhi, but on Tuesday they also bravely took on rains to register their protest.

The determination of teachers for their demands was seen on Tuesday night when amid the rain, the teachers decided to continue with their protest.

Protesting under green tents specially called in by the college staff association just a few days ago, the teachers pressed for their demands.

Sharing photographs of the protest, DU professor Rajesh Jha said, “The teachers are staging day and night dharna for last 35 days and are sleeping under open sky in chilly winter nights in nearly zero degree temperature for their valid demands but no one is ready to listen in the administration.”

On December 4, scores of professors and ad-hoc teachers of Delhi University had broken through the gates of the main hall of the varsity and registered their protest against the Vice-Chancellor and demanded appointment, absorption and promotion of ad-hoc teachers.

A day later, the Ministry of Human Resource Development held talks with the agitating professors and teachers of Delhi University which also failed to bring results and since then the protest has been continuing.

“We are here because the gate (V-C office gate) which was always open has been shut for teachers for a very long time and we want it to be opened again,” Delhi University Teachers’ Association President Rajib Ray had said on December 5 after a six-hour marathon meeting with DU officials on the issue.

The meeting had also failed to provide a solution.