ECoR lays the foundation stone of Waste to Energy Plant 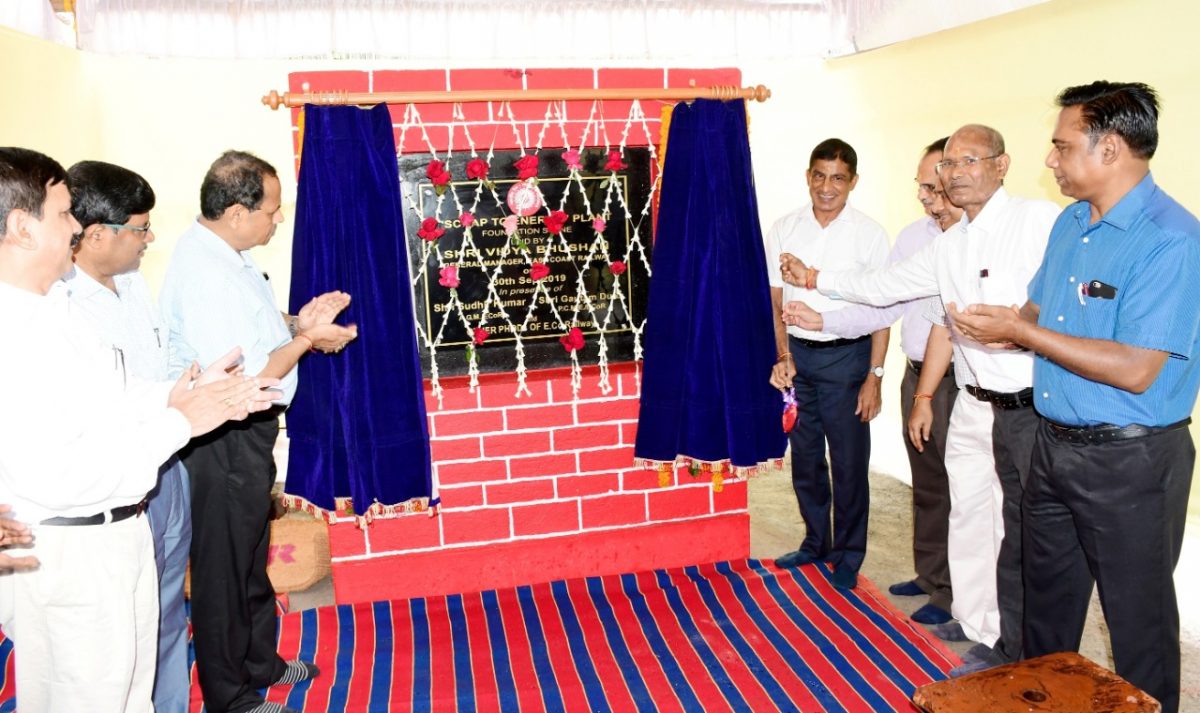 East Coast Railway (ECoR) General Manager Vidya Bhushan today laid the foundation stone for a Waste to Energy Plant at Carriage Repair Workshop here as an initiative of Swachh Bharat Abhiyan.  ECoR sources said the plant is first of its kind in Indian Railway and third in the country. The first plant, a small one with a capacity of 50 kg/ day is at Moti Bagh, Delhi and the second one has been set up by Infosys at Bangalore.

This Waste to Energy Plant will be constructed in four months and the target date of commissioning of this Plant is January 2020. An amount of Rs two crores will be spent on commissioning of this Polycrack Plant. Waste generated from Mancheswar Carriage Repair Workshop, Coaching Depot at Bhubaneswar, Railway Station will be feeder material for this plant which will access 500 KG waste materials per day.

The estimated Operational cost per annum will be Rs 25 lakh and estimated income from the byproducts is expected to be around Rs 10 to 12 lakh. Lots of non-ferrous scraps are being generated in the Carriage Repair Workshop at Mancheswar, Bhubaneswar which has no efficient method of disposal.

The scrap finds their way to landfills, which is environmentally hazardous. Carriage Repair Workshop has found a way of tackling this problem in a patented technology called Polycrack. It is the world’s first patented heterogeneous catalytic process which converts multiple feedstocks into hydrocarbon liquid fuels, gas, carbon and water. This is the 1st-of-its-kind in Indian Railways and third in India.

Polycrack Plant can be fed with all types of Plastic, Petroleum sludge, Un segregated MSW with moisture up to 50 per cent, E-Waste, Automobile fluff, Organic waste including bamboo’s, garden waste Jathropa fruit and palm bunch. Polycrack has several advantages over the conventional approach of treating solid waste.

Biological decomposition is not allowed as the waste is treated as it is received. The footprint of the plant is small hence the area required for installing the plant is less when compared with the conventional method of processing. All constituents are converted into valuable energy thereby making it Zero Discharge Process.

The gas generated in the process is re-used to provide energy to the system thereby making itself reliant of its energy requirement and also bring down the operating cost. There is no atmospheric emission during the process unlike other conventional methods except for combustion gases which have pollutants less than the prescribed norms the world over.

The combustible, non-condensed gases are re-used for providing energy to the entire system and thus, the only emission comes from the combustion of gaseous fuels. The emissions from the combustion are found to be much less than prescribed environmental norms. This process will produce Energy in the form of Light Diesel Oil which is being used to light furnaces.