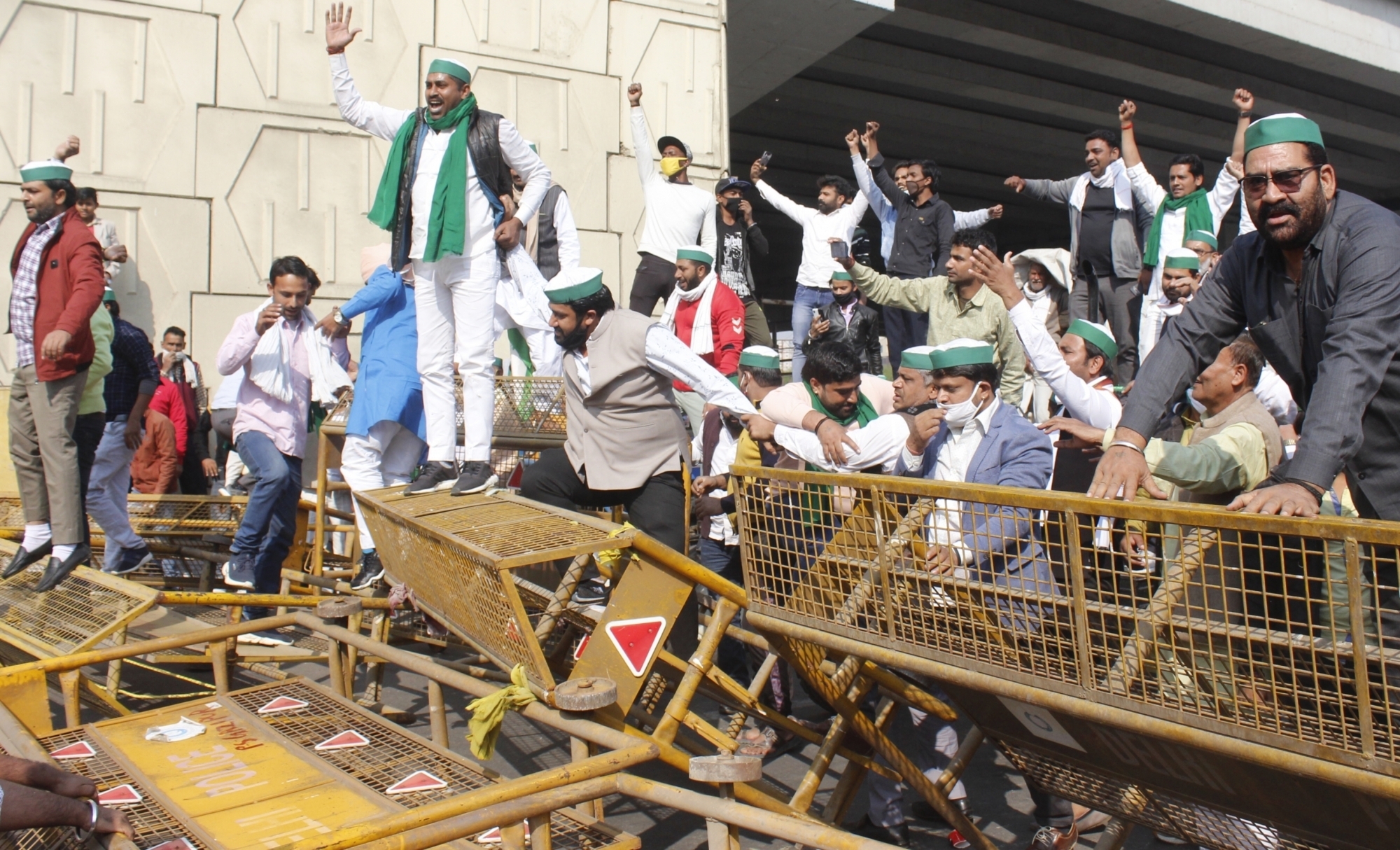 New Delhi, Nov 29 (IANS) Refusing to accept the Centre’s offer to shift to the Burari ground in north-west Delhi to hold their proposed protest against the three central farm laws, thousands of farmers continued to rally for the third consecutive day on Sunday at Delhi’s three interstate border points.

As the farmers continued to protest peacefully by shouting slogans against the government at Singhu, Tikri and Ghazipur entry/exit points on the Delhi-Chandigarh, Delhi-Bahadurgarh and Delhi-Uttar Pradesh routes respectively, their numbers were swelling as more and more farmers were arriving at the spots.

It was learnt that the farmers had been instructed to stay put where they were till further instructions. Even BKU leader Rakesh Tikait said that they have also decided to stay at Ghazipur. “We will not leave this spot. We will not move to Burari. The Centre should come forward and listen to the farmers,” he added.

The farmers were adamant on their demand that the Centre revoke the three farm laws to end the impasse, though they were not clear about their next course of action as leaders of multiple farmers’ unions were holding meetings since Sunday morning to mull their future strategy.

After braving two chilly winter nights under the open skies, the undeterred farmers began another round of sloganeering against the central government as the sun rose on the horizon.

Even as heavy security bandobast was in place, the farmers did not try to enter Delhi despite the authorities allowing them to move to the Burari ground in north-west Delhi, where only half of the around 1,000 or so farmers who were staying put since Friday evening were present on Sunday afternoon.

While leaders of farm unions were busy meeting to come up with their future course of action, others were busy addressing the farmers rallying at the borders in chaste Punjabi through loudspeakers about their demand.

Farmer Satbir Singh, a resident of Fatehgarh Sahib district in Punjab, asserted at the protest site that it was the “biggest revolution against the three farm laws enacted by the central government”.

“Even the Punjabi diaspora in the US and Canada have come in support of the farmers’ protest. We will not move back an inch until and unless they repeal the laws. We will not go back until these draconian laws are done away with,” Satbir said.

He asserted that that a general consensus among protesting farmers was to refuse Union Home Minister’s offer to shift to the Burari ground before the government holds parleys with them. “We will not move from the Singhu and Kondli borders. The supply chain has been disrupted and the pressure is mounting on the government.”

Another farmer warned that in case the government did not accept their demands, farmers were ready for an “indefinite protest” and more farmers were joining in as the clock ticked away.

Meanwhile, commuters continued to be put to inconvenience on these routes as farmers had parked their minitrucks, tractor-trolleys etc on the highways. Many commuters preferred to walk down for a few kilometres to reach their destinations in Delhi.

Sunil Kumar from Himachal told IANS: “I am on my way to Delhi. However, the bus was stopped 12 km before my destination. I don’t know how I will reach there. If I don’t get any vehicle to hitch a ride, I will have no option but to walk.”

Meanwhile, none of the leaders of over 30 farmers’ organisations — mostly from Punjab and Haryana — were available for comments.

Riding in hundreds of tractor-trailers, buses, cars and even motorcycles, many more farmers from the BKU (Ekta-Ugrahan) were expected to reach the Delhi border on Sunday.

As per police estimates, the number of protesters from the Left-leaning BKU (Ekta-Ugrahan) could be between 1.5 lakh and 2 lakh, including a sizeable number of youngsters and women.