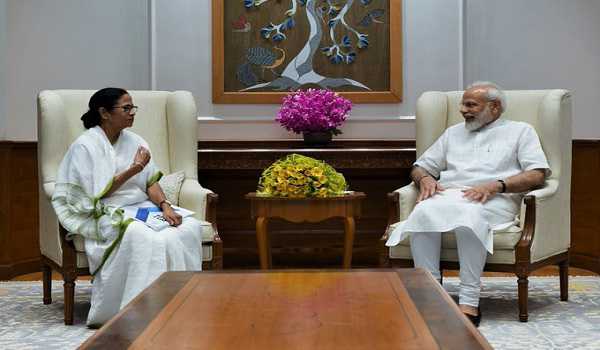 No sooner the meeting began at 7 Lok Kalyan Marg, PMO tweeted about the meeting with snap of both the leaders exchanging pleasantries.

According to sources, the meeting is likely to discuss administrative and developmental matters vis-a-vis the state of West Bengal.

Banerjee on Tuesday said in Kolkata that among other issues she would raise the issue of renaming of West Bengal as Paschhim Banga.

Incidentally, the meeting between PM Modi and  Banerjee comes at a time when the Saradha chit fund probe case has taken an interesting turn with the scanner falling on a number of Trinamool Congress leaders and onetime Mamata’s trusted aide and former Kolkata police commissioner Rajeev Kumar.

Banerjee had stayed away from the swearing-in ceremony of PM Modi and his cabinet on May 30.

Trinamool Congress supremo had also stayed away from NITI Aayog meeting on June 15 saying attending such conferences would be “fruitless”.

Trinamool sources, however, said no major political subject may be discussed as the structure of the meeting has been prepared on administrative issues.

This year’s Lok Sabha polls saw fiercest contest between Trinamool Congress and BJP and much to the chagrin of Ms Banerjee, the saffron party has managed to win as many as 18 parliamentary seats from the state where it did not have much organisational presence.

Responding to birthday wishes from Mamata Banerjee on Tuesday, Prime Minister has tweeted: “Thank you so much Mamata Didi”. He also hastened to add one line in Bangla – “Mamata Didi, apnar shubhechha-r janya dhanyavad”. (UNI)