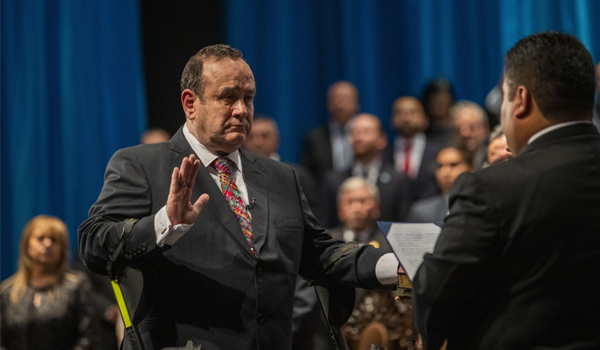 Guatemala City, Jan 15  Alejandro Giammattei Falla, a doctor and retired surgeon, was sworn in as new President of Guatemala.

During the ceremony on Tuesday, attended by six heads of state, Giammattei said he would try to straighten the direction the country was moving in, Efe news reported.

Giammattei, 63, received the presidential band at the hands of the outgoing President, Jimmy Morales, at a power transfer ceremony held at the Miguel Angel Asturias National Theatre in Guatemala City.

“Let me speak to the real protagonists of today, those who are not in this big room, but I keep them in mind more today than ever before: thanks to the people of Guatemala,” Giammattei said at the beginning of his inauguration speech.

The new President recounted that throughout his life he has had “to see death head-on” and that this is how he learned to serve others.

“Today, more than ever, I know that I must relentlessly strive to deliver a legacy of prosperity and progress within four years. This includes regaining trust in the institutions of the state, which has been lost to corruption,” he added.

In one of his first measures, Giammattei announced the promotion of a legal initiative to declare criminal gangs as terrorist groups, which he said was terming them “what they are.” In addition, he spoke of education reform.

He also stressed that fighting malnutrition would be a priority for his administration.

He took over the baton from Morales, who has ruled the Central American country for the last four years, and whose government the new president had criticized Monday as “a waste.”

The task is cut out for the new president in a country with one of the worst human development indexes on the continent, according to international organizations: it is among the worst when it comes to chronic child malnutrition, public investment in education and corruption alone.

Guatemala is also among the 10 most violent nations on the planet and nearly 60 per cent of its 16 million inhabitants are poor, most of whom are indigenous. One in four also live in extreme poverty.

The ceremony was attended by the leaders of Honduras, El Salvador, Colombia, the Dominican Republic, Panama and Ecuador.

Giammattei is the 11th President to take office since Guatemala became a democracy in 1986.