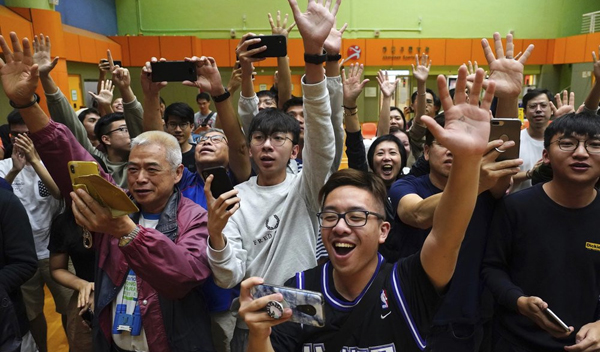 Jimmy Sham, co-ordinator of the Civil Human Rights Front, which organised the largest demonstrations in Hong Kong’s history last June and Andrew Chin, from the Power for Democracy platform, both became councillors, Efe news reported. Both have been attacked during Hong Kong’s protests, with Sham assaulted twice and Chin being bitten in the ear earlier this month by a man shouting pro-China slogans.

After his win in Lek Yuen district, Sham told the media that local elections were “a referendum” reflecting public opinion and its result was not a triumph for him, but for all of Hong Kong. Sham was attacked with a baseball bat and a knife in August by two masked men, although he emerged unharmed. In October he was beaten by four people carrying hammers and wrenches, causing him head and arm injuries. At least nine pro-democracy candidates who were victims of some form of attack during the last six months of street protests have won seats in the elections.

In the pro-China block, which had suffered a hard setback by securing only 59 seats at 9 a.m. local time, Junius Ho, widely disliked by protesters, failed to retain his seat, sparking cheers among pro-democracy movement voters.

According to his detractors, Junius — a lawyer aligned with Beijing — has links with local mafias, who indiscriminately attacked people in subway stations of tourist areas to sow chaos during protests. Junius was also attacked in early November by a person who approached him to take a picture but instead stabbed him with a cold weapon. Kelvin Lam, who replaced prominent activist Joshua Wong in the pro-democracy side’s leadership, also won his seat.

Wong is one of the most visible leaders of the democracy movement born in 2014 through the Umbrella Revolution and the only candidate authorities prevented from contesting the elections. Wong said on Sunday before voting that his disqualification proved the city’s elections are manipulated by China’s Communist Party, but that he’d continue fighting for the rights to self-determination of Hong Kong people.

The large majority of pro-democracy councillors is important because it will allow larger representation in the 1,200-member committee that will elect the next head of the Hong Kong Executive in 2020, traditionally dominated by Beijing’s allies.