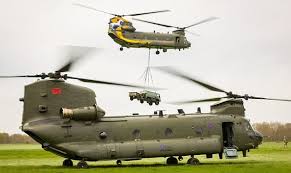 The four CH-47F (I) Chinook helicopters, part of the 15 contracted by India from US firm Boeing in September 2015 for over Rs 8,000 crore, were commissioned into the IAF’s 126 Helicopter Unit, nicknamed ‘Featherweights’, at Chandigarh.

The helicopters will be used in transporting troops, artillery and other equipment to border areas. It joined IAF’s 126 Helicopter Flight unit that operates the last batch of Russian made Mi-26 choppers, which would be phased out soon.

The other Chinook helicopters are likely to be delivered by March 2020.
India had also inked a deal of acquiring 22 Apache attack helicopters that will be inducted into IAF’s fleet by end of this year keeping in mind the two front threats of China and Pakistan.