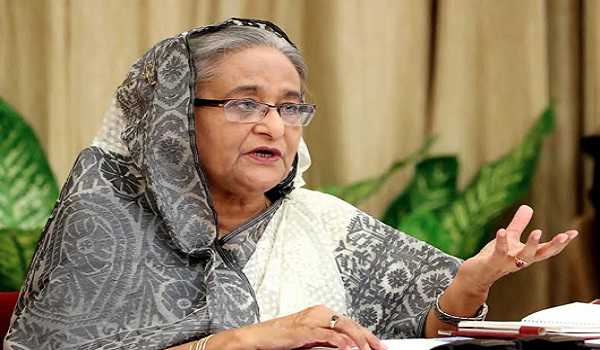 Bangladesh Prime Minister Sheikh Hasina has said that the bilateral relations between Bangladesh and India have reached to a special height following her four-day official visit to India from October 3 to 6.

The bilateral relations between Bangladesh and India have got a momentum following her four-day official visit to India, she said in her written speech while briefing newsmen about the outcome of the recent visits to India and the USA at Ganobhaban here on Wednesday.

During her visit to India, the premier attended the Indian Economic Summit of the World Economic Forum and held bilateral talks with her Indian counterpart Narendra Modi. Her eight-day visit to the USA was aimed at attending the United Nations General Assembly (UNGA) in New York.

During her India visit, the premier along with her Indian counterpart inaugurated three projects through video conferencing from New Delhi while Dhaka and New Delhi signed seven documents.

In her speech at the UNGA general debate on September 27, Sheikh Hasina placed a four-point proposal to solve the Rohingya crisis.

Sheikh Hasina said, Myanmar must manifest clear and concrete actions for sustainable return and reintegration of Rohingya to Myanmar, discard discriminatory laws and practices, guarantee security and safety of the Rohingya by deploying civilian monitors from international community in the Rakhine State.

International community must ensure that the root causes of Rohingya problem are addressed and the violation of human rights and other atrocity crimes committed against the Rohingya are accounted for, she also proposed.

The Prime Minister said, she highlighted her government’s unprecedented success in past ten years in various sectors for the country’s socio-economic development such as poverty reduction, social safety net, education and healthcare.

In her speech, she said, she had prominently featured peaceful use of nuclear energy, climate change and establishing culture of peace.

The premier said she attend a luncheon along with USA President Donald Trump and German Chancellor Angela Merkel in a same table hosted by the UN Secretary General.

About her visit to India, the premier said she joined India Economic Summit’s Country Strategy Dialogue on Bangladesh and in its closing plannery session held in New Delhi on October 3 and 4, respectively.

In her speech at the closing plannery session, the Prime Minister called for strengthening joint efforts for further enhancing regional, sub-regional and bilateral ties in the South Asian countries.

She also joined an interactive session with selected CEOs of Indian business organisations and the inauguration ceremony of India-Bangladesh Business Forum.

During her tour to New Delhi, the Prime Minister held bilateral talks with her Indian counterpart Narendra Modi at Hyderabad House on October 5.

Sharing of water of the common rivers, border security, security assistance, inter- communication, public communication, bilateral trade expansion, sub-regional cooperation, increase of investment and cooperation on power and energy sectors have come up for the discussion, she also said.

After the meeting, seven MoUs were signed and exchanged between the two sides to further strengthen cooperation on various sectors, she said, adding that they also inaugurated three development projects along with her Indian counterpart.

During her stay in New Delhi, Hasina paid a courtesy call on Indian President Ram Nath Kovind at Rashtrapati Bhavan while Indian External Affairs Minister Dr Subrahmanyam Jaishankar and President of India’s National Congress Sonia Gandhi, called on her at her palace of residence.

During the talks, she sought assistance from Singapore to send Rohingya back to their homeland.

During her meeting with Indian External Affairs Minister Dr S Jaysankar, the Prime Minister said that she had proposed for introducing air flights on Dhaka-Chennai, and Dhaka-Mumbai routes. Besides, proposal has also been given to use Syedpur airport of Bangladesh for communication and carrying goods to north-Eastern states of India, she said.

Apart from these, Sheikh Hasina said, she attended an event on 150th birth anniversary celebration program of Mahatma Gandhi in which a number of heads of the states and governments joined.

About Teesta water sharing, the premier said, Mr Modi assured to solve the problem after holding talks with the concerned people.

On Rohingya issue, she said that the Indian premier promised to continue discussion with Myanmar to solve the Rohingya crisis while he also agreed to solve maritime boundary problem.

Regarding National Registrar of Citizens (NRC), the premier said that Narendra Modi assured her that no unwanted incidents will be taken place as the process of NRC is being carried out following the due process.