India, Germany sign MoU regarding cooperation between select Museums of both nation 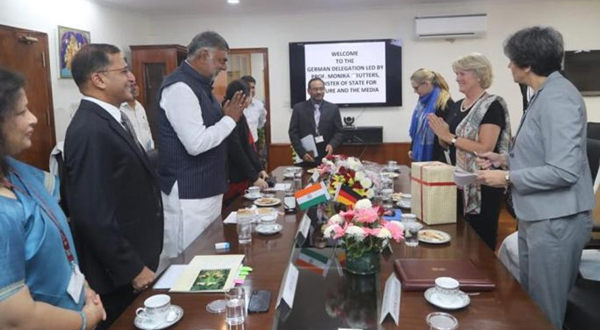 India and Germany on Friday signed a Memorandum of Understanding regarding cooperation between select museums of both the nations.

Union Minister of State for Culture & Tourism (IC), Mr Prahlad Singh Patel held bilateral meeting with German delegation led by  Monika Grutters, Minister of State to the Federal Chancellor, Federal Government Commissioner for Culture and Media here. During the meeting, a Memorandum of Understanding regarding cooperation between the Museums of India and Germany has been signed.

The aim of this Memorandum of Understanding is to research archaeological ethnological and art historical objects and their historical and contemporary sources within the framework of material culture studies. This will include intangible cultural heritage, restoration and conservation studies and education work. The basis for cooperation is the collections and expertise of the participating institutions.

During the meeting,  Patel said culture plays an important role in the development of a nation. India and Germany have a long tradition of academic and cultural exchange. Along with this MoU, the possibilities will be explored to translate classics belonging to both countries into German and Indian languages. For example, Sanskrit classics like Sannayasa Upanisads and Yatidharma Prakasha can be translated into German. Similarly, one of the following three German classics can be translated either into Hindi or Sanskrit: Die Blechtrommel by Gunter Grass, Buddenbrooks by Thomas Mann and the Trial by Franz Kafka.  (UNI)