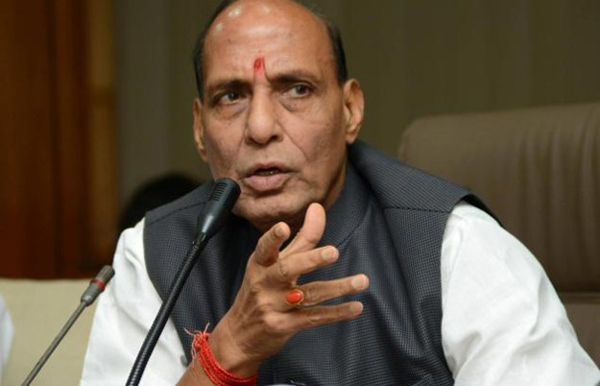 Defence Minister Rajnath Singh on Tuesday said Indian armed forces is capable of giving a befitting reply to those casting an evil eye on the country. Singh was reacting to Pakistan Minister Sheikh Rashid’s statement that if there is war, it would be nuclear. India has never been offensive and attacked any country, the Defence Minister said.

Talking to mediapersons here after inaugurating a two-day Naval Commanders’ Conference here, Mr Singh said, ”India has never been offensive. And it was India’s nature that it never attacked any country or tried to capture any piece of land. But Indian armed forces are capable of have that capability if anyone tries to look at India with evil eyes the forces will give them befitting reply.” To a question on defence budget constraint, Mr Singh said, ”The budget would certainly be enhanced, if needed. Our three forces are trying to end their dependency on imports and we want the country to be in such a position that it becomes an exporter country of defence items.”

Notably, the Indian Navy had last month said that it will request the government for higher budget in light of major acquisitions, including submarines and fighter aircraft. Currently, the Indian Navy’s share of defence budget stands at 13.66 per cent, which it wants to be enhanced to 18 per cent. In the budget, the government had allocated Rs 4.31 trillion for defence spending (including military pensions of Rs 1.12 trillion).

Expressing confidence that there would be no repeat of 26/11 like terror attacks through sea route,  Singh said, ”I am very much assured that our sea routes are safe in Indian Navy’s hands. It’s an Indian Navy’s commitment that there would be no repeat of 26/11 like attack.” On indigenization, he said, ”I am happy that the Indian Navy is moving forward towards indigenization. In the construction of ships, a high percentage of indigenization products are being used which is an appreciable job. ”I believe that the strength of Indian Navy has grown up in comparison to pasts,” the minister added.

The three-day naval commanders’ conference which was inaugurated by the defence minister will review major operational, materiel, logistics, HR, training and administrative activities undertaken during the previous six months and brainstorm upon the course to be steered in the ensuing months. (UNI)