Indian nationalism is not anti-thesis to being international, says Dr Jaishankar 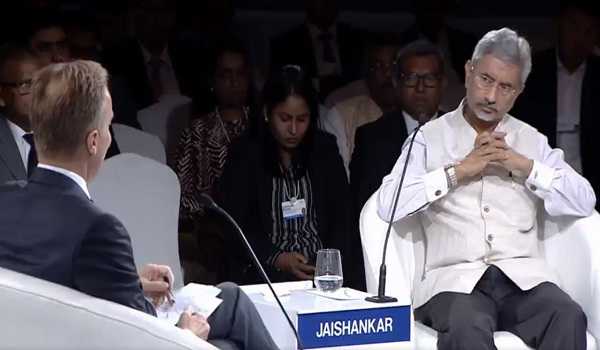 “In a way, we are a standout, we are an exception. Because, in this country you could say, we are more nationalistic but at the same time between being nationalistic and being internationational in the sense of dealing more with the world,” Dr Jaishankar told Norwegian politician and President of World Economic Forum Borge Brende in a question-answer session during World Economic Summit here.

“Nationalism is not a kind of a negative sentiment directed at the world,” he said adding people in India generally feel that “if you are going up, you should be doing more things with the world and not less”.

He said the old ways of working in diplomacy will not go away, “but it will get tampered by much creative, innovative and adhoc kind of arrangements often centring around issues”.

Dr Jaishankar, a former diplomat-turned Minister, said, “the character of diplomacy will change in many ways”.

To a question, External Affairs Minister said as a country which wants to influence the world, it ought to start ‘influencing the neighbourhood’.

“We are us, we are not some other country. And I think on whole lot of other areas, my own sense is as India becomes bigger, the fact is we will find that concepts and analytics which are developed for other countries will not necessarily apply to us,” he maintained.

Dr Jaishankar said India does not adhere to the idea of imposing its views on connectivity and development on others.

“We would rather say, we have a development partnership. In fact, that’s exactly what my Prime Minister (Narendra Modi) said when he went to Africa last year…..when he said, ‘Look we are prepared to do very much more in Africa, but we would like to know what you want’,” the minister said.

“That’s very much like our manner of doing things……I would say softer, a more collaborative, more co-owned,” he said adding in assertive tone – “Look, this is us; other countries may legitimately differ”.

In this context, he said “If you go to Afghanistan, it is not a story which always comes in the headlines. But I would say with a degree of confidence that probably more Afghans know about what India has done in terms of development than most other countries”. (UNI)