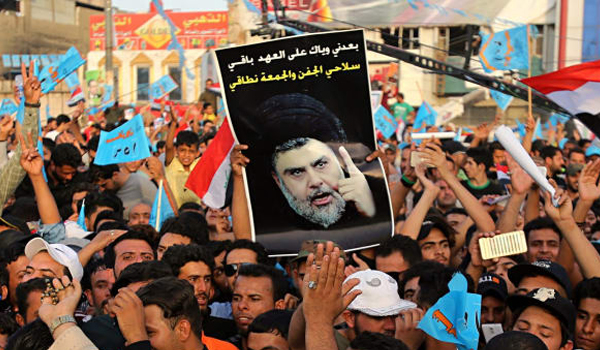 Iraqi parliamentary bloc Sairoon, led by influential Shiite leader Muqtada al-Sadr, announced on Saturday that it went into opposition amid a new wave of anti-government protests in the country, Alsumaria broadcaster reported.
The bloc explained that the decision was made due to lack of real steps on the part of the government to improve the situation and manage the crisis.
During the first wave of protests in early October, al-Sadr already called for the resignation of the country’s government and early elections, while simultaneously appealing to the bloc’s members to boycott the parliament until the government responds to the demands of the demonstrators.
In the 2018 parliamentary elections in 2018, the Sairoon bloc received 54 out of 329 seats in the legislature.
The protests began on October 1 and were suspended in mid-October for pilgrimage before resuming on Friday. During the first wave of protests, 149 people were killed and around 3,500 people sustained injuries.
The protesters call on the government to resign, and demand economic reforms and fighting against corruption. As the protests resumed on Friday, Iraqi Prime Minister Adel Abdul Mahdi said that he would carry out a cabinet reshuffle and introduce changes to election laws. Mahdi said that the government’s resignation, demanded by protesters, would throw the country in chaos.