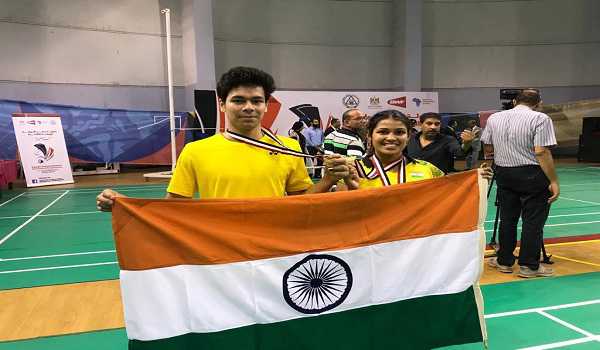 The Indian pair of Kuhoo Garg and Dhruv Rawat put up a brilliant effort to win the mixed doubles title at the Egypt International 2019 in Cairo on Sunday.

The unseeded Garg and Rawat held their nerves for a tight 21-16, 22-20 victory over the third seeds Utkarsh Arora and Karishma Wadkar in an all-Indian final.

Garg and Rawat showed excellent chemistry and understanding as a team this week on their way to the title.

They had accounted for the second seeds Ahmed Salah and Hadia Hosny 21-16, 21-15 of Egypt in the second round and then followed it up with a comeback 16-21, 21-16, 21-9 win over fourth seeds Koceila Mammeri and Linda Mazri of Algeria in the semi-finals.

Garg, however, failed to have double delight as she later went down in the women’s doubles final with Sanyogita Ghorpade. The two gave their all before bowing out narrowly, 16-21, 21-19, 19-21 to third seeds Simran Singhi and Ritika Thaker.

Meanwhile, at the Dubai International Challenge, Rituparna Das succumbed to a 21-23, 17-21 defeat in 36 minutes to Japan’s World No. 208 Mako Urushizaki. The World No 144 was looking for her first BWF title of the year.