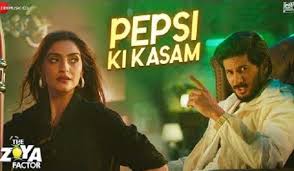 The new song is a visual treat as Sonam sizzles in her utmost hot avatar and Dulquer seems no less as he looks every bit dapper in the song. After releasing the song, the makers took to their social media and shared the third song.

Sharing the same they wrote, “Plugin your earphones and press the repeat button, because the new #TheZoyaFactor song #PepsiKiKasam is out NOW!”

Sonam tweeted,’Say bye-bye-bye to your Wednesday Blues ’cause our track #PepsiKiKasam is here.’ Dulquer said,’Ab har ghoont mein hi nahi, har beat pe bhi swag hoga! Our new song from #TheZoyaFactor is out now!’ Recently, Sonam is on the vlog spree where she has seen giving the insights of her daily routine during ‘The Zoya Factor’ promotions.

‘The Zoya Factor’ is an unusual story of Zoya Solanki who is an advertising agent becoming a lucky charm for the Indian cricket team when she chances upon meeting the captain of the team Nikhil Khoda and how it starts raining luck ever since then.

‘The Zoya Factor’ is being directed by Abhishek Sharma, and Fox Star Hindi is producing it. The film is slated to release on September 20. (UNI)