My visit to you was strictly personal, have not shared details of my conversation with you: Rahul to Parrikar 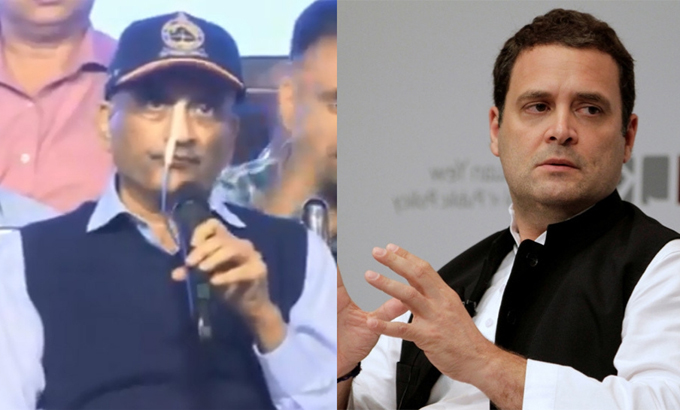 Responding to the allegations of politicising his visit to BJP leader and former Defence Minister Manohar Parrikar, Congress president Rahul Gandhi on Wednesday said his visit to the Goa chief minister was ‘strictly personal’ and driven by his empathy for the health condition of the latter.

In a letter to Mr Parrikar, Mr Gandhi, responding to a purported letter written by the Goa chief minister to him charging him of politicising his visit to the BJP leader, said, ‘Respectfully, my visit to you was strictly personal and driven purely by my empathy for your situation. You will no doubt recall that I also called you when you were undergoing treatment in the United States to enquire after your health and wish you well. ‘On the BJP and Mr Parrikar’s charge that he had, in his recent speeches, referred to conversations with Mr Parrikar during their meeting in Goa, Mr Gandhi said he had only referred to information that was already in the public domain.

‘I have not shared any details of my conversation with you when we met in Goa yesterday. In my two speeches since we met, I have referred to what is already in the public domain,’ he said.

‘It is a fact that in April 2015, while you were inaugurating a fish market in Goa, PM Modi announced the RAFALE deal in France with the then French President, Hollande. It is also a fact that you clearly stated to the press that you had no idea about the new deal engineered by the PM. This has been widely reported in all sections of the media.

Again, it is a fact that there is an audio recording of your own Cabinet colleague in Goa, claiming you told ministers in a cabinet meeting that you have the RAFALE papers in your “bed room”, implying that you have power over PM Modi and his cronies,’ Rahul said.

While asserting that he reserved the ‘absolute right to attack the corrupt PM on his blatant dishonesty in the RAFALE deal’, Rahul, however, said he understood that immense pressure to demonstrating his loyalty to the PM had led Mr Parrikar to attack him in this uncharacteristic manner.

‘Parrikar Ji, I empathise with your situation. I understand the Immense pressure you are under after our meeting yesterday. Pressure that has forced you to take the highly unusual step of demonstrating your loyalty to the PM and his cronies by attacking me in this uncharacteristic manner,’ Rahul said.

‘However Parrikar Ji, regardless of my visit, I am a democratic representative, elected to serve the Indian people, and as such I reserve the absolute right to attack the corrupt PM on his blatant dishonesty in the RAFALE deal,’Rahul said.

Earlier, Parrikar wrote to the Congress chief, accusing him of lying. The Rafale fighter jet deal, he wrote, had not even come up during their private conversation, Mr Parrikar wrote.

“Paying a courtesy visit and then stooping so low as to make a false statement for petty political gain has raised, in my mind, questions about the sincerity and purpose of your visit,” Mr Parrikar said.

He said such tactics should not be adopted against a person “fighting a life-threatening illness”. (UNI)