No discussion with Amit Shah on NRC in Bengal: Mamata 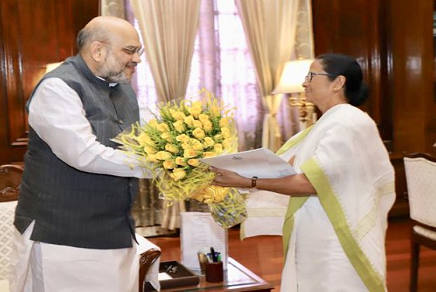 New Delhi, Sep 19 (UNI) West Bengal Chief Minister Mamata Banerjee on Thursday said there was no discussion held on National Register of Citizens (NRC) in Bengal  in her meeting  with Union Home Minister Amit Shah. After the  meeting with the Union Home Minister  in North Block, she said ” I have submitted a letter to Home Minister on the fate of 19 lakhs people excluded from Assam NRC. There are many Bangla, Gorkha speaking people in Assam NRC. No genuine person should be made to suffer. There is lot of anxiety among those excluded from NRC”, she further said. Ms Banerjee also said that she has taken up the proposal of renaming of West Bengal to Bangla with PM Narendra Modi yesterday. He told me that he will look into the matter, she said. Replying to a question on former Kolkata Police Commissioner Rajiv Kumar’s involvement in chit fund scam Ms Banerjee said that  it was a politically motivated query. Ms Banerjee’s meeting with Mr Shah lasted around 40 minutes