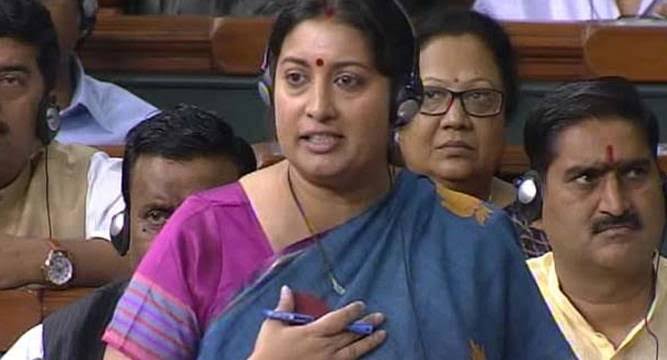 New Delhi, Nov 22:Union Minister for Women and Child Welfare Smriti Irani on Friday said that only 9 per cent of the children in the country get proper nutritious food.Speaking during the question hour session in the Lok Sabha, Irani, who represents the Amethi parliamentary constituency in the Lower House, said, “Quality of food is more important than quantity. It is an illusion that malnourishment is only limited to poor families or tribal areas. It is present across the country.”

She further said that even the rich and affluent families are not providing children with nutritious food. “It has been reflected in NITI Aayog data that only 9 per cent of the population is getting the right kind of nourishing food,” she said.Irani was responding to questions raised by the members in the Lok Sabha. She said the government has initiated various programmes to create awareness about malnutrition and related challenges and on holistic nutrition through a people’s movement known as Jan Andolan with a focus on Children.

Following the reply by Irani, Lok Sabha Speaker Om Birla asked her to prepare a diet chart for pregnant women and provide it to all members for circulation in their respective constituencies.”We should make a collective effort to end malnutrition in the country. I hope it will be eradicated by the last session of this Lok Sabha,” he said.