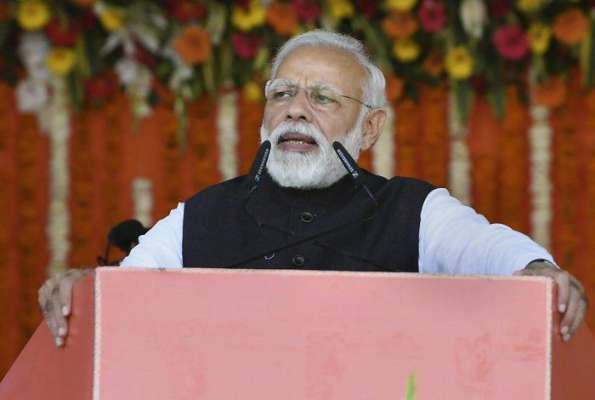 Prime Minister Narendra Modi on Wednesday lashed out at Congress party for launching ‘Chowkidar Chor hae’ campaign and said they did so because they did not have the courage to attack him personally.

“I would not have felt as bad had they (Congress leader Rahul Gandhi and other leaders) attacked me,” he said participating at the unique audio outreach programme with thousands of Chowkidars – security guards on the occasion of Holi festival.

But he said – the Congress leaders and others did not have courage to attack him personally. “Har admi ke andar chowkidar ko zinda rakhna hoga (There should be a custodian in the service of the nation in every man and woman),” Mr Modi said.

Slamming the opposition parties, he said those who have supported ‘Tukde tukde gang’ have not able to stomach the fact that terror camps were attacked in Pakistan.

Responding to some ‘chowkidars’ observation that there is no difference between them and the Prime Minister in office, Mr Modi said there cannot be any other better occasion for the country when a common man identifies himself with the country’s Prime Minister.

“In fact, anyone who is involved and committed to the service of the country is a Chowkidar. So is a teacher who educates people, so is a doctor who guards people from diseases,” Prime Minister said.

In an unusual outreach programme organised by the BJP, Prime Minister interacted with thousands of Chowkidars and also ordinary people from all walks of life across the country via an audio bridge.

This is a part of a series of initiatives under the much talked about ‘Main Bhi Chowkidaar’ outreach programme, party’s media in charge Anil Baluni announced here on Tuesday.

In his interaction, Prime Minister said in last five years, things have been changed and middlemen have been eradicated to a large extent.

“I understand your faith in me, your anguish that some people had the audacity of calling Chowkidar a chor. Let us take all these in our strides. Let 125 crore people turn into ‘Chowkidars (custodians)’ of their rights and duties. None can halt country’s progress,” he said.