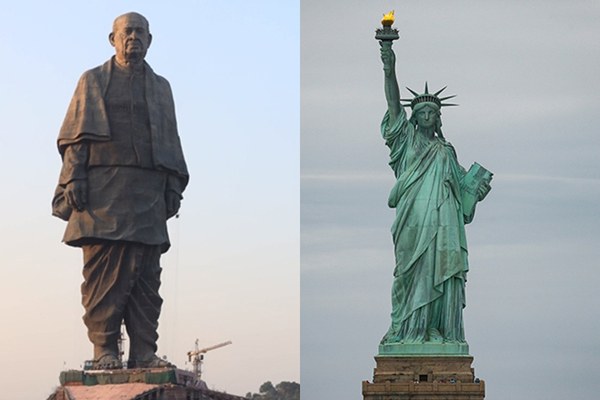 Prime Minister Narendra Modi on Tuesday compared the popularity of Sardar Vallabhbhai Patel’s 182-meter ‘Statue of Unity’, set up in his home-state Gujarat, with the New York-based ‘Statue of Liberty’ and said the 133-year-old American statue gets around 10,000 visitors per day, while 8,500 people visit the 11-month-old Patel Statue.

Addressing an event to mark the filling up of Sardar Sarovar dam on river Narmada here,   Modi, who had earlier taken an aerial view of the Statue of Unity in a chopper and also shared a video on his twitter handle said, “due to the Statue of Unity, Gujarat and Kevadiya have made a big mark on the world’s tourism map and gained immense popularity. Even as the Statue has not yet completed even an year of its dedication to the nation, it is only 11-months-old yet 23 lakh tourists have visited it so far. On an average every day 8500 tourists were visiting it. On the last Janmashtami day a record 34000 tourists had visited it in a day.”

Modi said that he could not see all the related tourist spots being developed around the statue of unity even after spending four hours. On completion these would make the tourists stay here for two to three days to see all these and this in turn would bring many more opportunities for the local tribal people.

He also appealed the people to save this area from the menace of single-use plastic pollution.

Notably, Prime Minister himself had dedicated the Statue of Unity on October 31 last year. It had left Springfield Buddha of China (153 m) behind to become the tallest statue across the world. 93-meter tall Statue of Liberty in New York which has now slipped to the fourth place. (UNI)