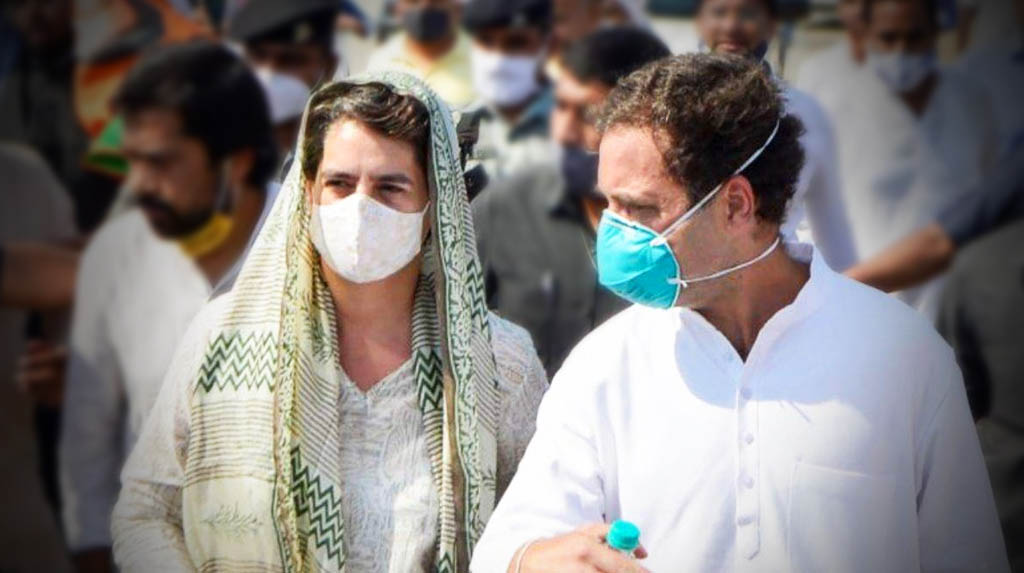 New Delhi: In a dramatic twist following massive police arrangements and traffic chaos, Congress leader Rahul Gandhi and his sister Priyanka Gandhi Vadra along with three other party leaders, were on Saturday allowed to meet the family of the 19-year-old Hathras girl who died four days ago after being allegedly gang-raped by ‘upper-caste men’.

Succeeding in his second attempt to meet the victim’s family, Rahul made the announcement from the Delhi-Noida Direct (DND) flyway where he, Congress General Secretary Priyanka and various Congress MPs and supporters were stopped by the police from entering Uttar Pradesh in the afternoon, leading to massive traffic jams with people stuck on the 9.2-km stretch for more than one hour.

It was Rahul and Priyanka’s second attempt to visit Hathras. On Thursday, Gandhi was pushed to the ground by Uttar Pradesh Police personnel when he was marching towards Hathras after their vehicles were stopped on the Yamuna Expressway in Gautam Budh Nagar.

Congress leaders were also detained by the police and a case registered against them under the Epidemic Diseases Act.

Earlier on Saturday, before moving towards Hathras, Priyanka had made it clear that she will meet the victim’s family “even if the police does not allow her to go there”.

Speaking to IANS before leaving the Congress headquarters here along with Rahul in their Toyota Innova vehicle, Priyanka said, “I will visit Hathras at any cost even if the police does not allow us.”

Priyanka drove the vehicle with her brother Rahul sitting next to her.

Along with the two leaders, dozens of Congress MPs including Shashi Tharoor are also travelling to Hathras.

Speaking to IANS, Tharoor said, “It is a terrible incident and we have to show our respect for the girl. Whatever has happened, nothing worse can happen in this country.”

On Friday, Priyanka Gandhi visited Delhi’s Valmiki temple to attend a prayer meeting for the girl who died on Tuesday at a government hospital in Delhi. Priyanka has said that the family of the victim should not feel alone at this point of time.

Congress leaders on Thursday alleged that the police resorted to lathi charge on them when they tried to march towards Hathras.

The Uttar Pradesh government has formed a Special Investigation Team (SIT) to probe the death of the 19-year old girl.

Uttar Pradesh Police personnel had sealed the village barring the entry of any mediapersons for the last two days. However, the media was allowed to enter the village earlier today.

The 19-year-old girl, who died on Tuesday at Delhi’s Safdarjung Hospital, suffered fractures, paralysis and a spinal injury after the savage assault.