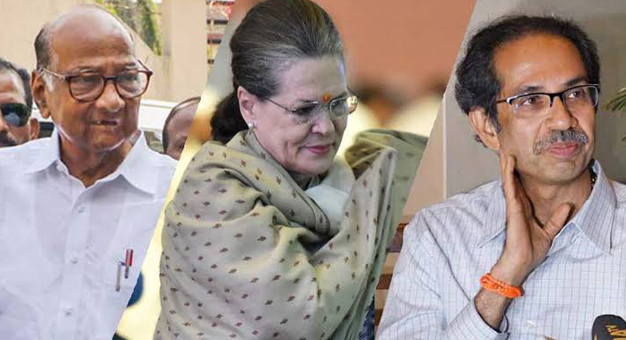 New Delhi, Nov 28 Accusing the BJP of indulging in “shameless attempt to subvert democracy in Maharashtra”, Congress president Sonia Gandhi on Thursday said the Congress, Shiv Sena and NCP are united in their resolve to defeat BJP’s manipulations in the south-western state.

Addressing a meeting of the Congress Parliamentary party, Ms Gandhi, speaking about the developments in Maharashtra over the past few days, charged Governor Bhagat Singh Koshyari of acting in “an unprecedented and most reprehensible manner.”

”We are meeting this morning against the backdrop of what can only be described as a shameless attempt to subvert democracy in Maharashtra. The Governor behaved in an unprecedented and most reprehensible manner. There is no doubt that he acted under the instructions of the Prime Minister and the Home Minister,” Ms Gandhi said. She said the Congress, Shiv Sena and the NCP are united in their resolve to defeat BJP’s manipulations.

”The BJP’s pre-poll alliance did not hold because of its own arrogance and over-confidence. Every effort was made to blatantly sabotage the three-party alliance government formation, but we appealed to the Supreme Court and the Modi-Shah Government was totally exposed. Let me assure you, we three parties are united in our resolve to defeat the BJP’s sordid manipulations,” the Congress leader added.