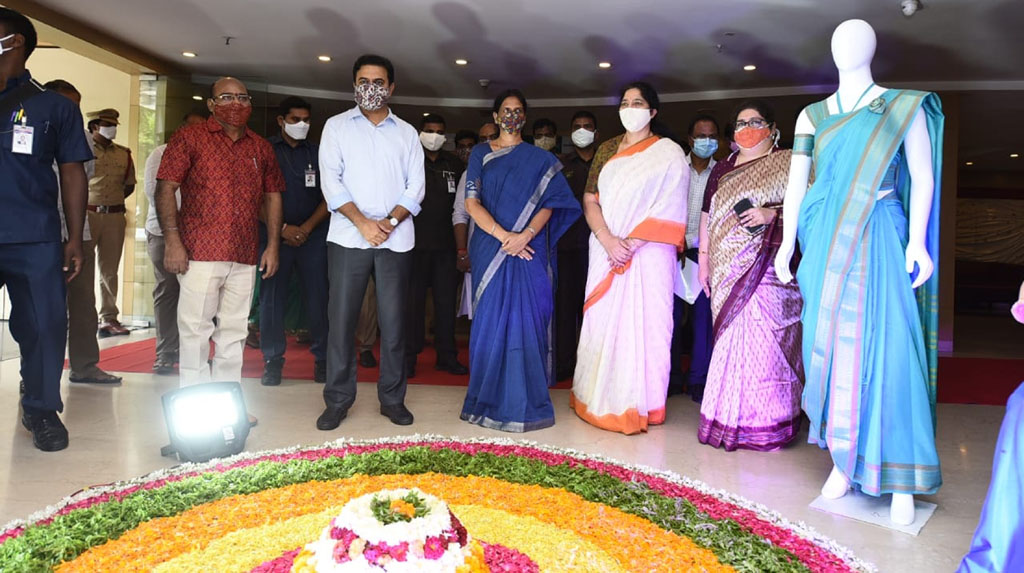 Hyderabad: For the fourth year in a row, the Telangana government will distribute nearly one crore sarees among women belonging to poor families for the ensuing ‘Bathukamma’ festival.

Distribution of 99 lakh sarees will begin from October 9 and this will cost the state exchequer Rs 317.81 crore.

State minister K.T. Rama Rao on Tuesday said that since 2017, the government distributed four crore sarees. For this, 30 lakh metres cloth was produced and about Rs 1,033 crore were spent.

Seeing, along with women ministers Sabitha Indra Reddy, and Satyavathi Rathod, the display of Bathukamma sarees here, Rao said that the distribution will be taken up under the supervision of District Collectors and through local women groups. The sarees have been produced with 287 kinds of designs.

The sarees are sourced from the weaver clusters in the state. The programme is providing continuous employment and ensuring better income to the powerloom weavers.

KTR, as Rama Rao is popularly known, stated that the Telangana government has been working towards the welfare of the weavers’ community and in the past six years, the government has introduced many welfare schemes exclusively for weavers. Under schemes like ‘Chenetha Mitra’ and ‘Nethana Ku Cheyutha’, the government is providing subsidies to weavers.

He claimed no other state government in India has taken up such programmes.

The Education Department is giving government school uniform orders to power loom weavers. Similarly, the Women and Child Welfare Department is also giving Anganwadi orders to the weavers and even the sarees in KCR kits given to pregnant women are produced by the weavers of Telangana, he added.

KTR claimed as a result of all these programmes providing work to the weaving community, the state is no longer witnessing suicides by weavers.

Stating that all the religions are treated equally by the state government, he said saree distribution is being taken up during Dussehra, Ramzan, and Christmas.

He asked the officials to create a branding for the sarees that could be sold in other markets and states.

Bathukamma is the floral festival of Telangana celebrated around Dussehra. Singing and dancing around specially arranged flowers, women celebrate Bathukamma across the state. The nine-day folk festival symbolises the state’s rich cultural identity.

Ever since the formation of Telangana state in 2014, Bathukamma has been celebrated as the state festival.

The government started distribution of sarees among women belonging to Below Poverty Line (BPL) families in 2017. In 2018, the Election Commission stopped the programme in view of the Assembly elections.