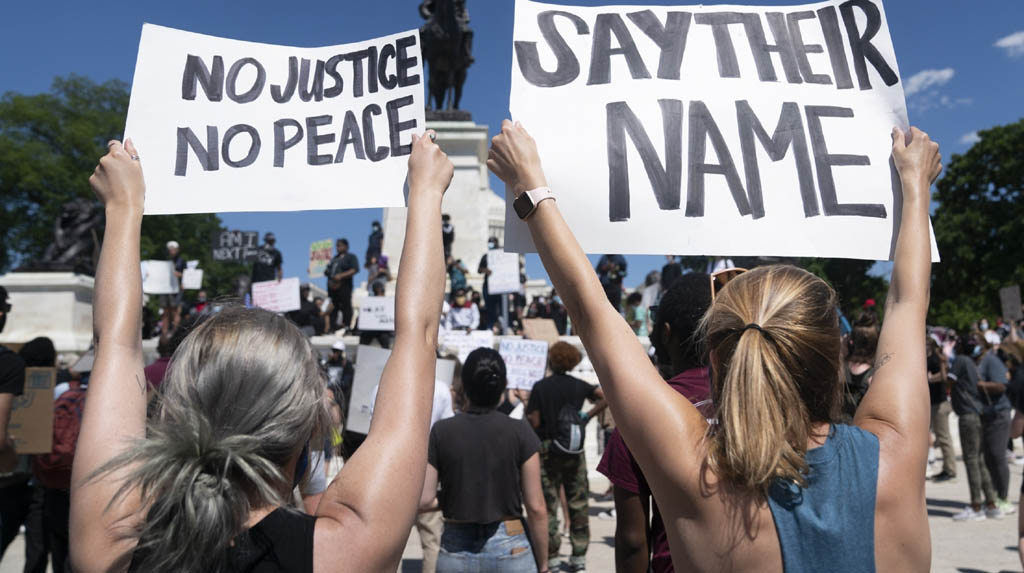 Washington: Chanting slogans while holding placards, thousands of protesters marched to Washington, D.C., staging what is expected to be the largest demonstration in the US capital against racial injustice and police brutality.

After eight days of protests that ebbed and flowed in the district, people from around the country gathered with renewed momentum on Saturday, streaming into the capital from nearby places such as Arlington, Virginia, Xinhua news agency reported.

Destined for the city’s landmarks like the Lincoln Memorial, Capitol Hill, and the White House, which has been fortified with tall black fences, the demonstrators in one group were heard chanting “Whose streets? Our streets”.

D.C. police closed much of the downtown area to vehicle traffic starting 6 a.m., with boundaries of the restricted area reaching the National Mall in the south and L Street NW in the north.

The western end is along 19th Street NW and the eastern edge is Ninth Street NW through the city centre down to Third Street NW facing the US Capitol.

Other groups were proceeding along 15th and H streets NW, as well as Pennsylvania Avenue, a diagonal street connecting the White House and the US Capitol.

D.C. Mayor Muriel Bowser, who on Friday urged President Donald Trump to pull back military forces deployed in the city against the protesters, greeted the crowd near the White House — which she referred to as “the people’s house” — saying that today she “pushed the Army away from our city”.

Saturday’s protests in D.C., by and large calm, came as the nation has been engulfed in demonstrations from coast to coast over the brutal May 25 killing of Minneapolis black man George Floyd under the custody of white police.

Under Bowser’s direction, the section of 16th Street leading to the White House was renamed “Black Lives Matter Plaza” on Friday, honouring protesters not just in the capital but around the country in pursuit for racial equality.

In addition to hanging up a sign featuring the new name at the corner of 16th and H streets, workers also painted a “Black Lives Matter” slogan in gigantic yellow letters on the part of 16th Street stretching two blocs between K and H streets toward Lafayette Square at the doorstep of the White House.

The actions are a direct rebuke to local law enforcement staff, who had been blamed for acting cruelly to disperse the peaceful demonstrators in the very area.

Also on Friday, Bowser sent Trump a letter, in which she requested that the President “withdraw all extraordinary federal law enforcement and military presence” in her city.

Federal law enforcement personnel and equipment, the mayor said, “are inflaming demonstrations and adding to the grievances of those who, by and large, are peacefully protesting for change and for reforms to the racist and broken systems that are killing Black Americans”.

Without consulting the White House, Secretary of Defence Mark Esper on Friday ordered the disarmament of the National Guards deployed in D.C., telling them not to use firearms or ammunition to tackle the protests.

Esper, who opposed Trump’s idea to call in the military, also ordered the troops amassed in the capital to be sent to their home bases.

Additionally, the D.C. National Guard confirmed on Saturday that it was investigating the appropriateness of the use of one of its helicopters during Monday’s protest for the purpose of clearing the way for Trump to walk to a church near the White House for a photo op, which has since caused tremendous controversy.