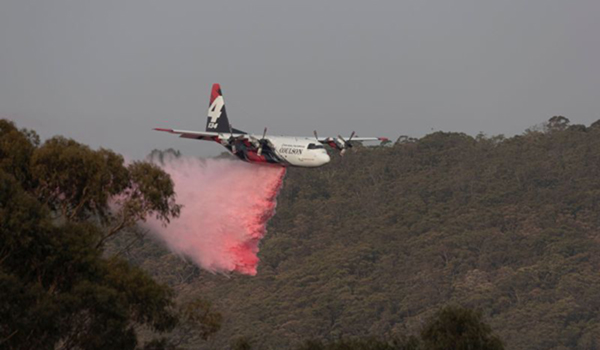 Sydney: Three people were killed on Thursday when a water-bombing plane fighting bushfires crashed into a large fireball in the Snowy Monaro area, south of the Australian capital, amid rising temperatures that have further fuelled the fires in the country.

“Three people have lost their lives after a large tanker crashed. Our thoughts and prayers and heartfelt condolences go to their families,” New South Wales Premier Gladys Berejiklian said.

She said the disaster was a “stark and horrible” indication that the fire season in Australia was far from over and highlights the “dangerous work” being undertaken to control the fires.

“Tragically, there appear to be no survivors as a result of the crash in the Snowy Monaro area. It has impacted heavily with the ground.

“Initial reports are that there was a large fireball associated with the impact of the plane as it hit the ground,” he said.

Fitzsimmons said there was “no indication at this stage on what caused the accident”.

The victims in the plane crash were not immediately identified but the commissioner said all three aboard were residents of the US.

Canberra Airport was closed on Thursday after the Australian authorities once again activated the fire alert over rising temperatures, which in some places exceeded 40 degrees Celsius.

The flights arriving in and departing from the country’s ninth busiest airport in terms of the number of passengers were suspended around midday due to a fire raging nearby, the airport said in a statement on social media.

In the Sydney region, where the mercury reached 41 degrees, it is feared that severe heat conditions, strong winds and potential storms could aggravate the situation.

Strong winds in the mountains posed an increased risk of fires, said the meteorology bureau of New South Wales, whose capital is Sydney. Some 84 fires, 40 of them uncontrolled, are raging in the region.

“There’s every potential for flare-ups and new ignitions to come out of some of these fire grounds,” Fitzsimmons said.

The authorities in the Australian Capital Territory, which includes Canberra, were also on alert against the danger of fires before temperatures begin to fall again on Friday.

Bushfires, which have been raging since September and which worsened on New Year’s Eve, have claimed 32 lives and affected more than 1 billion animals.

These fires, which experts say have been more intense this year due to global warming, have so far emitted 400 megatons of carbon dioxide into the atmosphere, an amount equivalent to the country’s average annual emissions, according to the global environment monitoring programme Copernicus.

A survey by the Australia Institute published on Thursday found that 57 percent of the people surveyed across the country of 24.6 million inhabitants felt the impact of fires and smoke, while 26 percent experienced health problems as a result.

The report also underlined that about 1.8 million people were unable to work because of the fires, and the loss in productivity was estimated at AU$1.3 billion (US $894 million).

“Australia is in the grip of a national climate disaster. The social, economic and medical impacts are vast and only just starting to become clear,” said Tom Swann, a senior researcher at the Australia Institute.