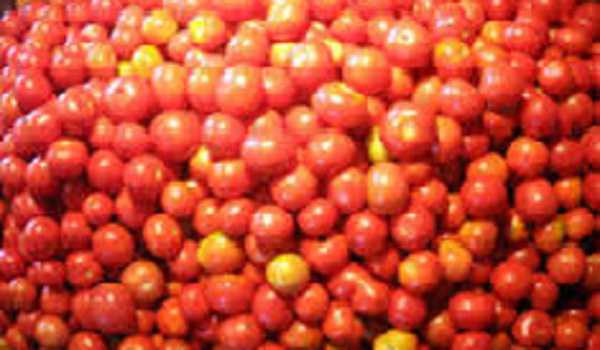 Islamabad, Nov 20 (UNI) Tomato prices in Pakistan has hit a record high and reached Rs 400 per kg in a day, Dawn reported on Wednesday.

In the absence of any landed price of tomato from Iran, greedy traders also brought the price of Swat and Sindh crop at par with the Iranian tomato rate to make huge profits, it said, adding, ‘But the local administration, like its past practice, quoted an unrealistic retail rate of Rs253 per kg compared to Rs193 per kg on Monday.’

In the first week of November, the official retail rate of tomato was Rs117 per kg and Tuesday’s official price clearly indicated that the government itself was revising the price upward.

Traders said a box containing 13-14 kg of tomato was available at Rs 4,200-4,500 depending on the quality, thus forcing many traders to suspend purchasing.

The government had last week issued a permit for importing 4,500 tonnes of tomato from Iran, but the arrival of the red fruit had yet to pick up pace in the market, resulting in a persistent hike in the rates in view of rising demand.

Of the 4,500 tonnes, only 989 tonnes had arrived in the country so far, a trader said, adding that he could not confirm whether more quantities arrived at the Taftan border on Tuesday.

People urged to not buy tomato for ‘two-three days.’

Soon after Pulwama attack that killed over 40 CRPF personnel in February this year, farmers from Madhya Pradesh stopped exporting tomatoes to Pakistan.

As a result, tomato prices sky-rocketed in the neighbouring country. Reports suggest that tomato exported from India fetch around three times profit in Pakistan.

However, Dawn newspaper reported that Pakistan has already banned imports of tomato and potato from India for the last two years in fear of disease.