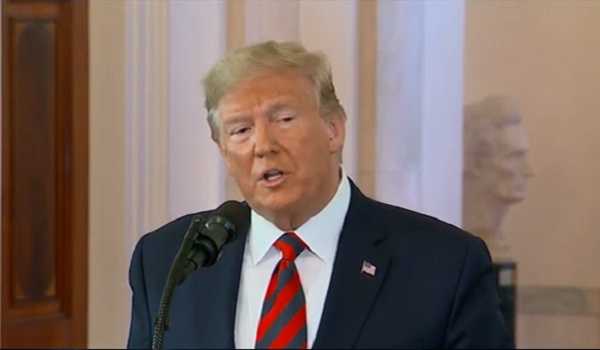 US President Donald Trump on Monday called for the impeachment of House Speaker Nancy Pelosi and Democrat Congressman and House Intelligence Committee Chairman Adam Schiff for treason amid an ongoing impeachment investigation into the president himself.

Trump has been embroiled in a political scandal following a whistleblower’s tip off into the potentially illegal dealings of the president’s administration. Schiff, in an interview with US MSNBC broadcaster, had wrongly implied that his committee had not had any contact with the whistleblower prior to him filing the complaint on August 12, whereas in reality, there was a brief exchange between the two sides. The New York Times broke the story on Wednesday.

“Nancy Pelosi knew of all of the many Shifty Adam Schiff lies and massive frauds perpetrated upon Congress and the American people, in the form of a fraudulent speech knowingly delivered as a ruthless con, and the illegal meetings with a highly partisan “Whistleblower” & lawyer… This makes Nervous Nancy every bit as guilty as Liddle’ Adam Schiff for High Crimes and Misdemeanors, and even Treason. I guess that means that they, along with all of those that evilly “Colluded” with them, must all be immediately Impeached!” Trump tweeted.

According to the New York Times, the whistleblower had approached the Intelligence Committee to voice his concerns over Trump using his political office to solicit interference in the upcoming 2020 presidential election and was directed to contact an Inspector General with the complaint by a committee staff member.

On September 24, Pelosi announced an impeachment inquiry into Trump’s July 25 telephone call with Ukrainian President Voldymyr Zelenskyy. The inquiry was initiated after a whistleblower sent a complaint to Congress, saying Trump pressed Zelenskyy to investigate possible corruption by 2020 Democratic presidential candidate Joe Biden and his son Hunter Biden and threatened withholding US military aid to Ukraine.

Trump denied the allegations calling them another attempt at a political witch hunt to reverse the outcome of the 2016 US presidential election and published the transcript of the telephone call with Zelenskyy.  (UNI)