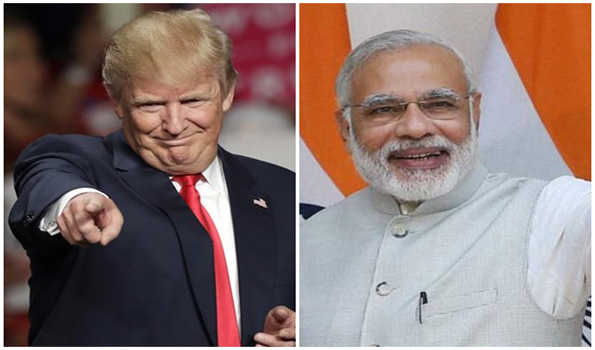 In a Twitter missive, the Prime Minister said, ‘The special gesture of President DonaldTrump to join us in Houston highlights the strength of the relationship and recognition of the contribution of the Indian community to American society and economy.’

The Prime Minister said that US President’s participation signifies the special friendship between India and the US.

‘A special gesture by POTUS, signifying the special friendship between India and USA! Delighted that President DonaldTrump will join the community programme in Houston on the 22nd,’ he tweeted.

‘Looking forward to joining the Indian origin community in welcoming him at the programme,’ Mr Modi added.

Terming President Trump’s participation in the event as a special gesture, Mr Modi said, ‘it highlights the strength of the India-US bilateral relationship and recognition of the contribution of the Indian community to American society and economy.’

Earlier today, White House had issued a press statement confirming Donald Trump’s participation in the event. Highlighting the importance of the event, it noted, “It will be a great opportunity to emphasize the strong ties between the people of the United States and India, to reaffirm the strategic partnership between the world’s oldest and largest democracies, and to discuss ways to deepen their energy and trade relationship.”

‘Howdy Modi – Shared Dreams, Bright Futures’ is a community summit hosted by Texas India Forum, for Prime Minister Narendra Modi on Sunday, September 22 at the NRG Stadium in Houston, Texas, USA. Over 50,000 people are expected to attend the event.  (UNI)