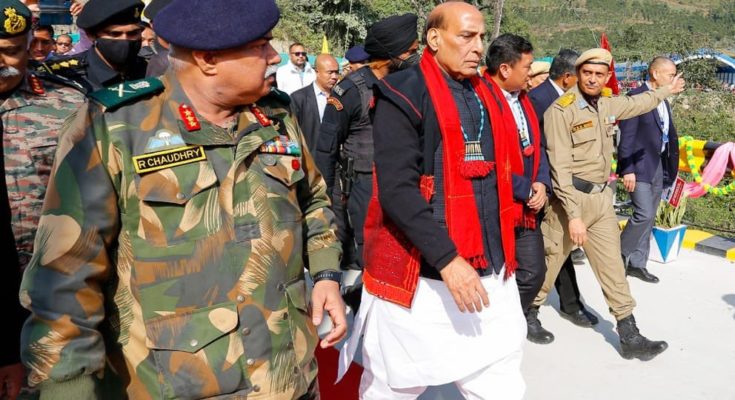 Eight of these projects are in Ladakh; five in Arunachal Pradesh; four in Jammu & Kashmir; three each in Sikkim, Punjab & Uttarakhand and two in Rajasthan. In addition, three telemedicine nodes – two in Ladakh & one in Mizoram – were inaugurated.

Shri Rajnath Singh emphasised that the aim is to build a strong and self-reliant ‘New India’ to effectively deal with future challenges which may arise due to the constantly-evolving global scenario. “The world is witnessing a number of conflicts today. India has always been against war. It is our policy. Recently, Prime Minister Shri Narendra Modi drew the world’s attention to that resolve when he said ‘this is not the era of war’. We do not believe in war, but if it is forced upon us, we will fight. We are ensuring that the Nation is protected from all threats. Our Armed Forces are ready and it is heartening to see that the BRO is walking shoulder-to-shoulder with them,” he said.

The Raksha Mantri further highlighted the crucial role played by the BRO in bolstering the country’s security through infrastructure development in border areas. “Recently, our forces effectively countered the adversary in the Northern sector and dealt with the situation with bravery & promptness. This was made possible due to adequate infrastructural development in the region. This motivates us even more for the progress of far-flung areas,” he said.

Terming infrastructure development as a game changer for the people residing in border areas, Shri Rajnath Singh lauded the BRO for ensuring socio-economic development in far-flung regions. He stressed that the government is paying special attention to the development of the North-Eastern region, which has strengthened the country’s security system.

For the Organisation’s relentless efforts to support the Armed Forces and the local people, Shri Rajnath Singh coined a new phrase “BRO is the nation’s bro (brother)”. Quoting a famous phrase ‘It’s not the destination, it’s the journey’, he said the construction of road infrastructure in border areas is a journey for BRO and a strong and prosperous India should be its destination.

The event at Along-Yinkiong Road witnessed the physical inauguration of the strategically-important Siyom Bridge, while the other projects were dedicated to the nation virtually. The Siyom Bridge is a state-of-the-art 100-meter long, Class 70 Steel Arch Superstructure Siyom Bridge over Siyom River in Arunachal Pradesh.

The three telemedicine nodes e-inaugurated by the Raksha Mantri will be connected with Service hospitals through VSAT (Very Small Aperture Terminal) satellite communications system. It will provide prompt medical intervention for medical & surgical emergencies through Telemedicine consultation with specialists at Service hospitals using SATCOM VSAT communication. This is one of the unique achievements for BRO in providing medical services to its personnel in remote border locations through use of space technology. The Raksha Mantri expressed hope that these nodes will prove to be helpful for the health-related needs of the local people.

With the inauguration of these 28 projects, which were completed in 2022, a total of 103 infrastructure projects of BRO were dedicated to the nation in the year at a total cost of Rs 2,897 crore. In October last year, 75 projects, worth Rs 2,173 crore, were inaugurated by the Raksha Mantri from Shyok village in Ladakh. In 2021, 102 such projects of the BRO were dedicated to the nation at a cost of Rs 2,229 crore. Shri Rajnath Singh commended the dedication and fast pace with which the BRO has carried out development works in the last few years despite challenging weather conditions at tough locations.

On the occasion, the Raksha Mantri also released a Compendium on New Technologies. It incorporates the latest technologies being adopted by the BRO in construction of roads, bridges, airfields and tunnel infrastructure to negate the effects of remote and hostile terrain with adverse weather condition, which unduly affects the quality of civil engineering works and meeting the completion timelines.