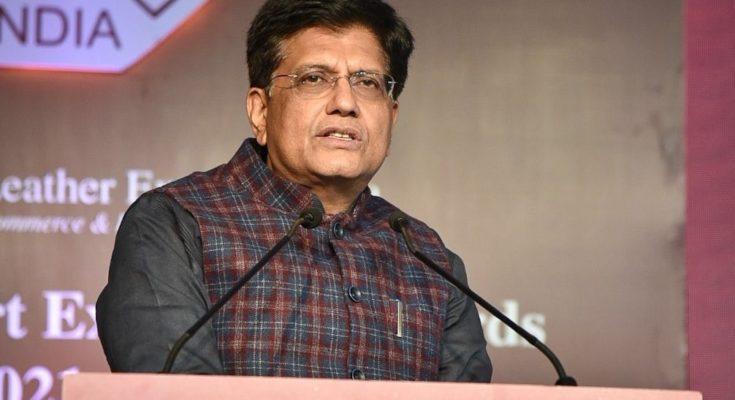 Footwear Industry: Union Minister of Commerce and Industry, Consumer Affairs, Food and Public Distribution and Textiles, Shri Piyush Goyal said India has the potential to become world leader in Footwear and leather sector with the efforts of both government and industry. He was addressing the gathering at the Council for Leather Exports National Export Excellence Award function in New Delhi today.

In his address to the awardees, Shri Goyal asked the organisers to explore the possibility of encouraging new companies, entrepreneurs, startups and those who come up with innovative ideas, enter into uncharted territory with newer markets and products, by recognizing them through these awards. He suggested some niche award segments can be created for recognizing their contribution- such as rewarding those who make effective use of FTAs etc.

The Minister said as we celebrate Azadi Ka Amrit Mahotsav, we hope to achieve higher exports than last year – both in goods and services. He said while most of the developed world, who are large consumers of leather products, are going through inflation and subdued consumer spending, he was happy to get reassurance from Leather sector that it would see higher growth compared to last year.

Shri Goyal asked the leather industry to utilize the FTAs being signed by India with various countries to grow. He cited the example of UAE, where exports in the sector registered a jump of 64 percent in November last year as a result of the new agreement.

Shri Goyal noted the concerns of the Leather Industry about import duties on certain types of Leather and assured that it will be taken up for consideration. He also urged the industry stakeholders to avail MOOWR scheme by Department of Revenue, wherein no duty is to be paid on goods which are being imported for the purpose for exports. This will certainly help make business more competitive, he added.

The Minister emphasised that Indian Industry has huge untapped potential. He noted that while the Quality of Products manufactured is good, more focus is required on packaging and branding to get better value for the product. Indian Mission across the world can help in providing support in terms of outreach and can help connect them with international companies engaged in branding business.

He encouraged the industry to aspire to set new goals, especially as India is entering into Amrit Kaal, that aims at inclusive growth and bringing prosperity to each and every citizen of India. Minister said we are trying to enter into more FTA with other developed nations of the world. He urged the Leather and footwear industry to aim for significant increases over the next 25 years and draw up a plan to achieve those goals. He asked them to look up at expanding horizons- explore new territories, manufacturing new products in india for import substitution.

Shri Goyal reassured that the Government is open to amending any standards which are hurting the interests of the industry. He also assured full support in terms of setting up testing facilities/ laboratories anywhere in the country to meet the needs of the industry. He said the Government is willing to engage with the industry on ease of doing business and asked them to give ideas on how to bring improvement in different areas where industry faces difficulty in business. He asked them to give suggestions on how to increase compliance, how to simplify laws, and which laws/ provisions can be decriminalized.

Shri Goyal informed that the Government is working on formulating a new scheme to support manufacturing of machinery required in the industry. He asked the industry to take advantage of all the schemes of the government.

He asked the industry to look at innovation and sustainability in their products. He also called for new collaborations with international companies to bring high quality products into India. Minister spoke about a few areas of immense potential such as Kolhapuri Chappals and asked young entrepreneurs to go beyond the routine and explore new designs/ branding in this area.