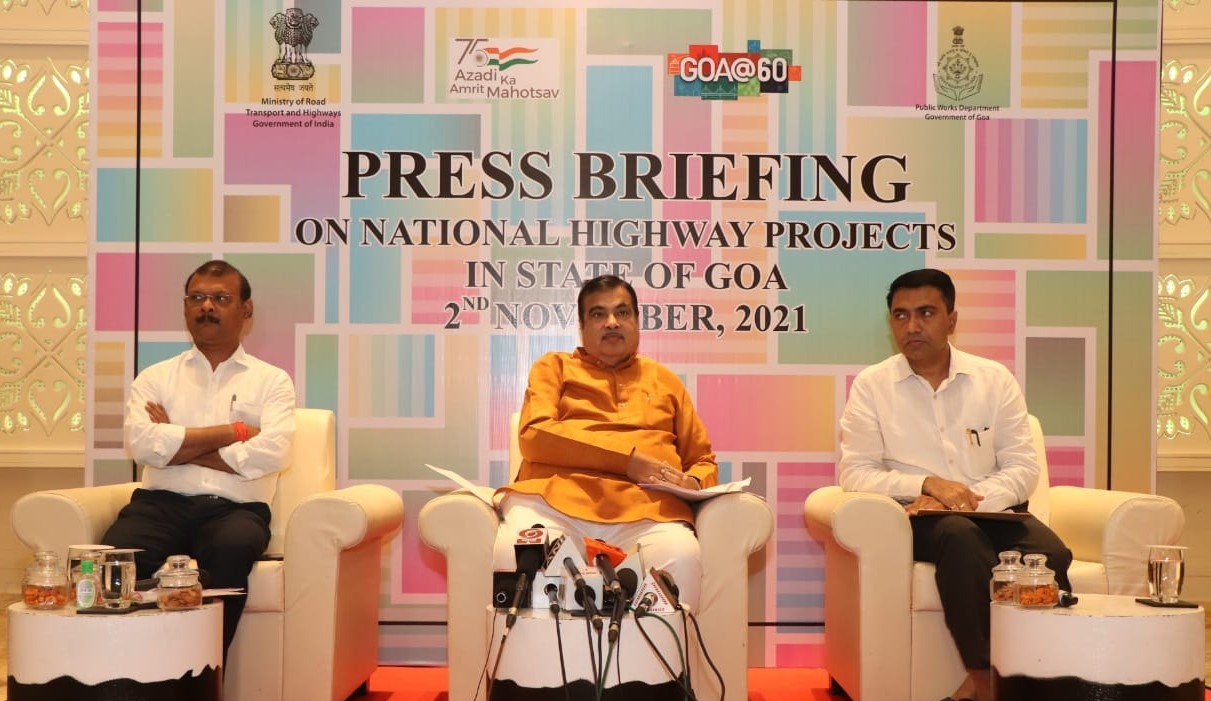 Mumbai/Goa: New road projects worth Rs. 1,250 crore for the state of Goa have been approved by Union Road Transport and Highways Ministry today. Union Minister Shri Nitin Gadkari today announced four new phases of road development work in the state. He was speaking at a press conference post a review meeting on the progress of national highway projects in the state today. “A number of schemes have been approved for the development of the state”, he said.

Development projects worth more than Rs. 25,000 crore, under Sagarmala and Bharatmala Projects, have been implemented in Goa since 2014, further stated Union Road Transport and Highways Minister Shri Nitin Gadkari.

The Union Minister informed that the annual budget for development works to be carried out by the Ministry of Road Transport and Highways (MoRTH) in Goa has been increased from Rs. 2,000 crore to Rs. 5,000 crore.

Speaking about the much-awaited state of the art bridge on Zuari river, which is deemed to be a major tourist attraction in the state, the Minister informed that it has been decided not to have any toll plaza at the bridge, although land has been acquired for that purpose. The toll plaza at state border will continue to be operational, he added.

The acquired land would be used for setting up tourist amenities like a revolving restaurant, gas stations etc. A viewers’ gallery modelled on the Eiffel Tower will also be set up on that land. Tender will be floated for this purpose, informed Shri Gadkari.

The layout of the gallery has been completed and the actual work will begin by December 15. One lane of the Zuari Bridge will be inaugurated in the first week of December. The restaurant and a mall, which will be developed along with the viewers’ gallery, will have access to both sides of the road. The Union Minister said that space would be made available in the mall for sale of local products.

The Union Minister further informed that work on the link road to Mopa Airport will start soon. The Ministry of Road Transport and Highways will spend Rs. 1,200 crore for the seven-kilometer road.

Shri Gadkari informed that the dredging work sanctioned by the Shipping Ministry for the Mormugao port from the Sagarmala project is currently incomplete and will be completed soon. He also said that the DPR for electronic clusters, pharmaceutical factories, fishing harbours has been completed and project work to start soon.

Development work is being undertaken taking care of the environment and ecology, stated the Road Transport and Highways Minister. He further informed that vehicle manufacturers have been instructed to manufacture flex engines to avoid huge expenditure on petrol and diesel imports.