On the First day of the Saka New Year, Science behind the Indian Calendar highlighted 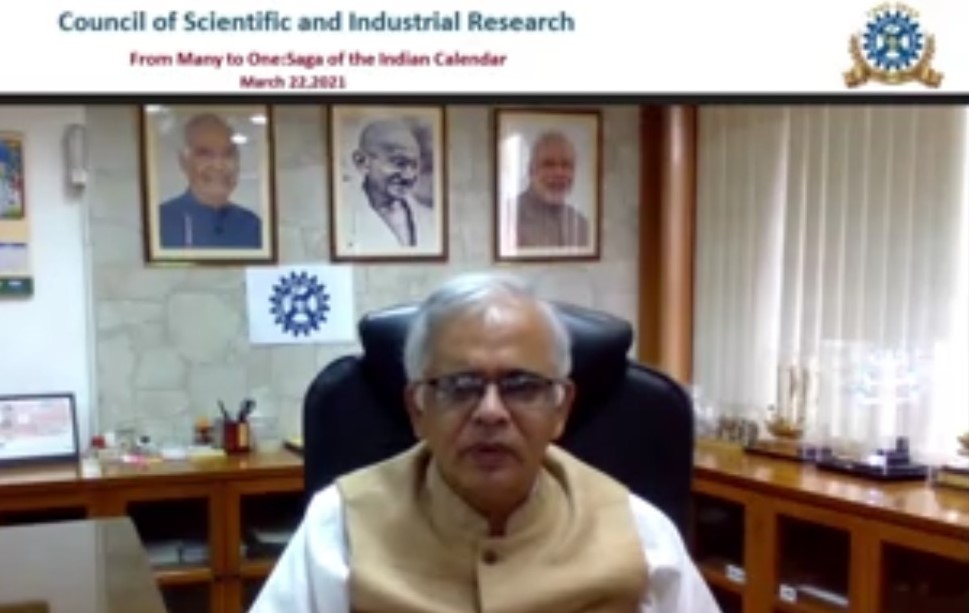 New Delhi, The Council of Scientific and Industrial Research (CSIR) joined the India@75 or Bharat ki Azadi ki Amirt Varshcelebrations with two events on 22 March 2021. Along with Vijnana Bharati (VIBHA), the CSIR and its Delhi-based CSIR-National Physical Laboratory (CSIR-NPL) organized an event, \”From Many to One: The Saga of the Indian Calendar\”. The event was held at the CSIR-NPL auditorium and was also live-streamed on digital platforms.

Welcoming the gathering, Dr Shekhar C Mande, Director General, CSIR, said that 22 March is a special day which, as per the Saka Calendar, is Indian New Year Day. Dr Mande highlighted how the many calendar systems in India required to be unified, and this task was assigned to the CSIR in the early 1950s. CSIR constituted a review committee under the chairmanship of Dr Meghnad Saha. The Committee submitted its report to the Indian parliament in 1956, and on 22nd March 1957,the country adopted the new unified Indian calendar.

Greeting all present on the New Year Day of 1 Chaitra 1943, Shri Jayant Sahasrabudhe, National Organizing Secretary, VIBHA, said that as India celebrates its 75th year of Independence, it is essential to recognize the contributions of Indian science and scientists during the independence movement.

Shri Sahasrabudhe highlighted how scientists and science leaders of the pre-independent era braved the many challenges that existed then and focused on furthering science by setting up important scientific institutions. The Indian calendar is among the many contributions of Indian science and scientists in India’s Independence’s early years, noted Shri Sahasrabudhe.

Dr Arvind C Ranade, Scientist F atVigyan Prasar, presented a detailed account of the various calendar systems and traced the Calendar Reform Committee’s contributions under DrSaha’s chairmanship. Dr Ranade called for more effective implementation of the Indian National Calendar. While the Gregorian calendar may be used for international references and transactions, the Indian national calendar can be used as an icon for regional integration and national unity as it is independent of any religion, he said.

The 22 March 2021 is also commemorated as World Water Day. CSIR and CSIR-Institute of Mining and Mineral Technology (CSIR-IMMT) organized a webinar on “TERAFIL: Water Purification System” technology. TERAFIL is a low-cost water purification system that has been licensed to over 120 MSMEs and industries. Today there are over 2,50,000 installations of the TERAFIL based water filters all over the country. The TERAFIL water purification system is among the 80 technologies that CSIR is showcasing as part of its 80 years celebration.