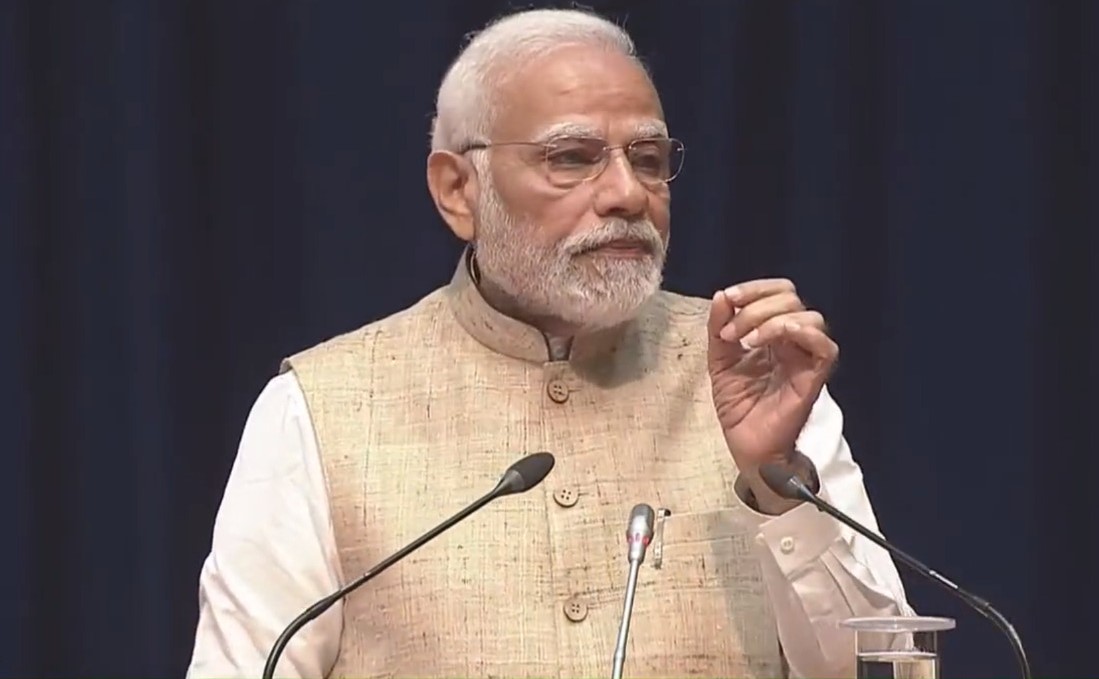 New Delhi: Prime Minister Narendra Modi has asserted that India is strengthening the ideals of the constitution and the pro-people policies are empowering the poor and women of the country.

Addressing a function in New Delhi to celebrate Constitution Day today, November 26, he said that laws are being made easier and accessible for the common citizens and the Judiciary is taking many steps to ensure timely justice.

Mr. Modi reminded that, in the current global scenario, the world is looking at India with hope amidst its growing economy and international image. He referred to the first three words of the Preamble, ‘We the People’, and said, it is a call, trust, and an oath.

Terming the Amrit Kaal as Kartavya Kaal, the Prime Minister emphasised that the mantra of duty towards the nation is first and foremost. He added that be it people or institutions, our responsibilities are our first priority.

Mr. Modi highlighted the contributions of countless individuals from the Legislature, Judiciary, and Executive in the last 70 decades of the journey of development and expansion of the Indian Constitution.

He informed that in a week’s time, India is going to attain the G20 Presidency, and stressed the need to promote the prestige and reputation of India in the world as a team.  Prime Minister Modi added that the identity of India as the mother of democracy needs to be further strengthened.

During the programme, the Prime Minister launched various new initiatives under the e-court project. The project is an effort to provide services to litigants, lawyers, and the judiciary through information and communication technology.

The public can access the Virtual Justice Clock of any court on the District Court’s website. Through Just IS Mobile App 2.0, judges of the High Court and Supreme Court can now monitor the case pendency and its disposal.

The Digital court is an initiative to make court records available to the judge in digitized form. The S3WaaS website is a framework to generate, configure, deploy and manage websites for publishing specified information and services related to district judiciary.

Speaking on the occasion, Chief Justice of India, D. Y. Chandrachud said the story of the Indian Constitution is not a story of only legal text and interpretation, it is the story of human struggle and sacrifices and undoing injustice against the marginalised section of the society.

He said the technologies are being adopted to improve the working of courts. He underlined that it is of supreme importance that the courts are remodelled to reach out to the people instead of people reaching out to the courts.

Law Minister Kiren Rijiju said the Prime Minister has highlighted the need to encourage local languages in courts to increase the confidence of the common men in the judicial system and to make them feel connected too. He informed that under the aegis of his Ministry, the Bar Council of India has constituted Bharatiya Bhasha Samiti.

The committee is listing out words and phrases which are most commonly frequently used in various branches of law for developing a common core vocabulary close to all Indian languages for translating legal material into regional languages.