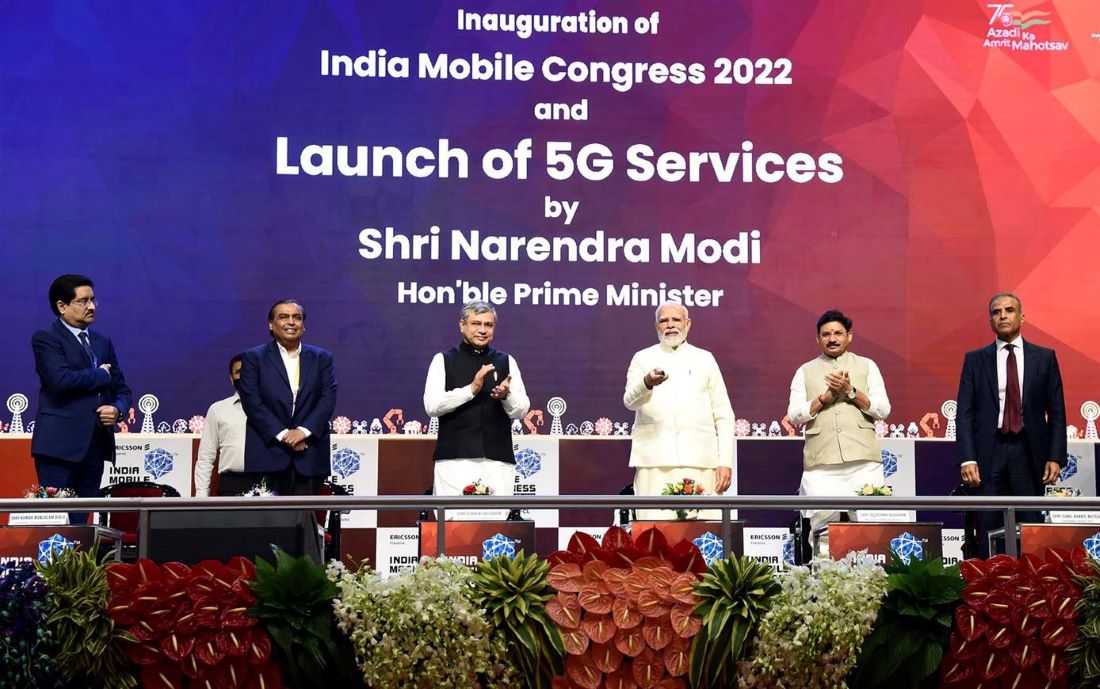 Industry leaders expressed their views on this historic occasion.

Shri Mukesh Ambani, Chairman, Reliance, thanked the Prime Minister for inspiring the vision of a developed nation by 2047. “Every action and policy of the government is skillfully crafted to propel India, towards that goal. Steps taken to fast-track India’s march into the 5G era provide compelling proof of our Prime Minister’s determination”, he said. He narrated the possibilities of 5G in key areas like education, health and climate etc. “Your leadership has raised India’s prestige, profile and power globally like never before. In today’s fast-changing world there will be no stopping a resurgent India from soaring to the top”, Shri Ambani concluded.

Shri Sunil Bharti Mittal, Chairman, Bharti Enterprise remarked that the launch of 5G is the beginning of a new era and since it is happening during Azadi Ka Amrit Mahotsav, it makes it even more special. “With the efforts of the Prime Minister, this will usher new energy in the country.

We are fortunate to have a leader in the Prime Minister who understands technology very minutely and deployed that to the development of the country in an unmatched manner”, he added. Shri Mittal further said that it will open up a sea of opportunities for people, especially in our rural areas. He recalled the Prime Minister’s initiatives in the field of infrastructure and technology from his Gujarat CM days. He said that during the pandemic, traffic shifted to villages and homes and the country’s heartbeat did not stop even for a second. Credit for that goes to the digital vision.

He also praised the audacity and achievement of the vision of Make in India.“Along with Digital India, the Prime Minister also took forward the Start-up India campaign and soon enough, India started producing unicorns”, Shri Mittal added, “With the advent of 5G, I’m sure that the country will add many more unicorns in the world.”

Shri Kumar Mangalam Birla, Chairman, Aditya Birla Group called the advent of 5G a transformational event that proves India’s prowess on the global stage and reiterates the role of telecom technology as the bedrock of India’s growth. He thanked the Hon’ble Prime Minister Shri Narendra Modi for his vision and leadership for a generational leap in technology that has resulted in India making a mark on the global stage.

He also thanked the Prime Minister for his inspirational role in supporting the telecom industry during the ongoing pandemic and for the path-breaking telecom reforms in the industry. Shri Birla said that the launch of 5G marks the beginning of an exciting journey for India. “We will see limitless potential for 5G development and use cases in the years to come”, he added.

The three major telecom operators of the country demonstrated one use case each in front of the Prime Minister to show the potential of 5G technology in India.

Reliance Jio connected a teacher from a school in Mumbai, with students in three different locations in Maharashtra, Gujarat and Odisha. This demonstrated how 5G will facilitate education by bringing teachers closer to students, obliviating the physical distance between them. It also demonstrated the power of Augmented Reality (AR) on screen and how that is being used to teach children across the country, remotely, without the need for an AR device.

The Vodafone Idea test case demonstrated the safety of workers in an under-construction tunnel of Delhi Metro through the creation of a Digital Twin of the tunnel on the dias. Digital Twin will help give safety alerts to workers in real time from a remote location. PM took a live demo from the dias to monitor the work in real-time through utilising VR and Artificial Intelligence.

The Prime Minister interacted with Shri Rinku Kumar, a worker in Delhi Metro Tunnel Dwarka, New Delhi in presence of Delhi Lieutenant Governor, Shri Vinai Saxena. The Prime Minister inquired about the user experience and learning curve needed to adopt the technology. He said that workers’ confidence in safety is the biggest contribution of new tech. He complimented the workers of India for their contribution to the nation’s growth.

In the Airtel demo, students from Dankaur, Uttar Pradesh witnessed a lively and immersive education experience to learn about the solar system with the help of Virtual reality and Augmented reality. A student Khushi shared her experience of learning with the PM by appearing on the dias through a hologram.

Uttar Pradesh Chief Minister, Shri Yogi Adiyanath connected from Rudraksh Convention Centre, Varanasi. The Prime Minister inquired if the VR education experience helped them understand the concepts in a comprehensive way. The student said that after this experience she is much more inclined toward learning new things.

Addressing the gathering the Prime Minister said that the Summit today might be global but its repercussions and directions are local. He said today is a special day for the fast-developing India of the 21st century. “Today, 130 crore Indians are getting a wonderful gift in the form of 5G from the country and from the telecom industry of the country.

5G is a knock on the doors of a new era in the country. “5G is the beginning of an infinite sky of opportunities. I congratulate every Indian for this.”, he added. He noted with satisfaction that in this launch of 5G and the march of technology, rural areas and workers are equal partners.

Stressing one more message of the 5G launch, the Prime Minister said” New India will not remain a mere consumer of technology, but India will play an active role in the development and implementation of that technology. India will play a big role in designing the future wireless technology, and manufacturing related to it.”

The Prime Minister pointed out that India was dependent on other countries for 2G, 3G and 4G technologies. But with 5G, India has created a new history. “With 5G, India is setting a global standard in telecom technology for the first time”, he remarked.

Talking about Digital India, the Prime Minister said that some people think that this is just a government scheme. “But Digital India is not just a name, it is a big vision for the development of the country. The goal of this vision is to bring that technology to the common people, which works for the people, works by connecting with the people.”

Focussing on the need for a holistic approach to Digital India, the Prime Minister elaborated that “we focused on 4 Pillars, in four directions at once. First, the price of the device, Second, digital connectivity, Third, the cost of data, Fourth, and most importantly, the idea of ‘digital first’.

Regarding the first pillar, the Prime Minister said that the low cost of devices can only be achieved through Aatmnirbharta. The Prime Minister recalled that there were only two mobile manufacturing units in India till eight years ago. “These numbers have now gone up to 200”, Shri Modi said.

The Prime Minister underlined that from exporting zero mobile phones in 2014, today we have become a mobile phone exporting country worth thousands of crores. “Naturally, all these efforts have had an impact on the cost of the device. Now we have started getting more features at a lower cost”, he added.

On the second pillar of digital connectivity, the Prime Minister informed that internet users have increased to 80 crores from 6 crores in 2014. From less than 100 panchayats in 2014 now 1.7 lakh panchayats are connected by optical fiber.

“Just as the government started a door-to-door campaign to provide electricity, worked on the mission of providing clean water to everyone through the Har Ghar Jal Abhiyan, and delivered gas cylinders to the poorest of the poorest people through the Ujjwala scheme, our Government is working in a similar manner on the goal of Internet for all”, he said.

Regarding the third pillar, the cost of data, the Prime Minister said that the industry was given a slew of incentives and technologies like 4G received policy support. This brought down the price of data and a data revolution was ushered in the country. These three pillars started showing their multiplier effect everywhere, he said.

On the topic of the fourth pillar i.e. Idea of ‘Digital First’, the Prime Minister recalled the time when a handful of the elite class questioned if the poor would even understand the meaning of digital and doubted their potential, the Prime Minister said that he always had faith in the understanding, wisdom and inquisitive mind of the common man of the country. He said that he always found the poor of the country ready to adopt new technologies.

Highlighting the government’s efforts in the field of digital payments, the Prime Minister remarked that it was the government that went ahead and made the way for digital payments easier. “The government itself promoted citizen-centric delivery service through the app. Whether it is about farmers or small shopkeepers, we have given them a way to meet their daily needs through the app”, Shri Modi added. He recounted the seamless continuation of DBT, education, vaccination and health services, and work-from-home during the pandemic when many countries were finding it difficult to keep these services going.

Remarking that Digital India has given a platform, the Prime Minister said that small traders, small entrepreneurs, local artists and artisans can now market to everyone. Shri Modi added, “Today you go to a local market or vegetable market and see, even a small street vendor will tell you, not to transact in cash, but via ‘UPI’.” “This shows”, the Prime Minister added, “When a facility is available, thinking also gets emboldened”. The Prime Minister said when the government works with clean intentions, the intentions of citizens also undergo change. “This is the key difference in the intention (niyat) of 2G and 5G”, he remarked.

The Prime Minister interjected, “It is a different matter that we did not make a fuss about and did not launch big advertisements. We focused on how the convenience and Ease of Living of the people of the country increased.” “India may not have benefitted from the first three industrial revolutions, but I am confident that India will take full benefit of the 4th industrial revolution and, in fact, will lead it”, he added.

The Prime Minister informed that the use of 5G technology will not be limited to speedy internet access, but it has the capability to change lives. He said that we will see the promises of the technology realized in our lifetimes. Shri Modi urged the leaders of the telecom industry association to visit the schools and colleges of the country and unleash every aspect of this new technology.

He also asked them to create an enabling ecosystem for MSMEs to prepare spare parts for electronic manufacturing. “5G technology should be used to bring about a revolution in the country”, he remarked. The Prime Minister highlighted the use of drone technology that has been made possible after the newly launched Drone Policy. He pointed out that many farmers have learnt how to fly drones and started making use of them to spray insecticides and pesticides in the fields. The Prime Minister assured one and all that India of the future will guide the world in the upcoming technology sector, in turn making India a global leader.